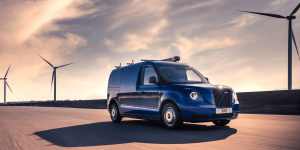 The Geely subsidiary LEVC has presented the series version of its electric van with range extender called VN5, which can be ordered immediately and delivered from the end of 2020. Prices for the British market have been revealed.

The commercial electric van is a plug-in hybrid with a range extender. The van should be able to travel 93 kilometres with zero-emissions. With the range extender, which LEVC calls eCity, the total range increases to 482 kilometres.

The VN5 (where the VN stands for ‘van’) offers up to 5.5 cubic metres of charging space and a payload of up to 830 kilograms. The rear door opens at a ratio of 60:40. The sliding side door is big enough to load a pallet from the side. A 50 kW charger will be able to charge the 31 kWh battery in 30 minutes fully. The AC charging capacity is 11 kW ex-works.

Besides the advantage that the VN5 can also drive into areas where access is restricted for combustion engines, the model should also offer “competitive operating costs” according to LEVC. The maintenance intervals are 40,000 kilometres. The aluminium body is to be particularly corrosion-resistant. Body parts made of composite material should also be less sensitive to small dents.

In the basic Business configuration, the VN5 is to cost 46,500 pounds in the UK, the equivalent of 51,770 euros – all prices are before government subsidies, which in the UK is up to 8,000 pounds. The City equipment version (including parking sensors at the front and rear as well as some driving assistants and safety features) will cost 48,000 pounds (53,440 euros). The top model with the name Ultima is in the price list at 52,000 pounds (57,893 euros) and offers, among other things, a 22 kW AC charger, a navigation system, electrically adjustable seats, a rearview camera, and some optical changes.

Earlier this month, Royal Mail announced that it is currently testing a prototype version of the VN5. The postal service is one of 25 businesses taking part in the British trial, which will last until Q4. The Geely subsidiary LEVC announced the VN5 name in March. Pre-series production of the PHEV van has already begun, as reported, with mass production scheduled to start in Anstry near Coventry in the 4th quarter of 2020. LEVC expects the van to account for around 70 per cent of the plant’s annual production capacity of 20,000 vehicles.