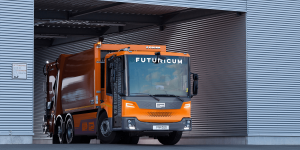 Designwerk has entered a partnership with Daimler Trucks and has included a low-entry chassis based on the Mercedes Econic in its own product range. The first vehicle of this type is to be delivered in the second quarter of next year.

The existing demand for vehicles with a low-entry model prompted the Swiss manufacturer to expand its product range. In order to meet the demand, Designwerk’s  Futuricum brand has had to increase its workforce.

The basic Mercedes-Benz vehicle is widely used in inner-city applications, especially in municipal and distribution transport. “Thanks to the low-entry entry via just two steps, the process of getting in and out of the vehicle is accelerated, which is advantageous in so-called stop-and-go operation,” says Designwerk. When electrifying the Econic, the company could benefit from previous experience and exploit synergies in development and production. Many elements of the electric drive system would remain identical. The Swiss company Contena-Ochsner AG will continue to be Futuricum’s development partner for street sweeper bodies and street sweepers.

Around 20 new jobs will be created at the company’s headquarters in Winterthur so that the vehicle can be smoothly integrated into the company’s product range. The first low-entry vehicle will be delivered in the second quarter of next year.

At the same time, Designwerk is not the only company using the Mercedes-Benz Econic as its base vehicle. At the beginning of this year, the commercial vehicle retrofitter Quantron expanded its range and put the Econic under electric power. In line with the company’s business model, it is possible to electrify older existing vehicles and convert new trucks.