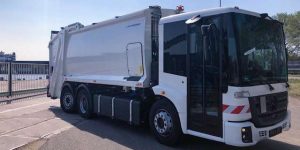 The young German commercial vehicle conversion company Quantron is expanding its range to include waste disposal vehicles and is now offering conversions of the Mercedes Econic.

Now, the young German company is expanding its range to include the waste collection vehicle variant of the Mercedes Econic. And this only a few weeks after Daimler Trucks itself announced the series development of the eEconic. One thing is certain: Quantron will be faster because Daimler is not aiming for series production of the electric-truck before 2022.

The company based in Gerstenhofen, not far from Munich, and can start immediately, although Quantron says that current Covid-19 circumstances could extend the delivery time to four months. According to the company, once the electric powertrain and battery have been installed in existing or new vehicles, the converted Econic will have an output of 350 kW and a battery capacity of 280 kWh. This means that the waste collectors will be able to travel “about 150 kilometres, depending on the application profile”. The bulk material is operated purely electrically as a low-voltage system (24 V), and an auxiliary drive feeds the single-circuit hydraulics for the pressing function. HS Fahrzeugbau supplies the body in the form of the Olympus rear loader in combination with the Terberg OmniDEKA e-Lifter.

The Mercedes Econic has been produced since 1998. The second generation of the commercial vehicle has been available since 2013 in two diesel engine variants and with a gross vehicle weight of 18 to 26 tons. When converting an existing vehicle, the basic vehicle should comply with the Euro 6 standard, according to the Gerstenhofen headquarters. This means that only vehicles of the second generation come into question. Quantron says of the vehicle that it has the advantage of low-entry access so that the co-drivers and operators of the body only have to negotiate a low two-step entrance to get into the cab. This positive effect is supported by the full air suspension with lifting and lowering function on all axles. Quantron also cites the folding door opening inwards to the side facing away from traffic as a significant advantage in terms of safety. This would prevent both the driver and road user from being exposed to unnecessary, dangerous situations on the road.

Daimler Trucks is taking a different approach to the electrification of the Econic: The OEM is using the Mercedes-Benz eActros as the basis for the waste collection vehicle. Daimler Trucks says that the eEconic “will initially be offered in the 6×2/N NLA configuration”. Whether and what changes will be made to the eActros that Daimler released in 2018 remains to be seen. Two electric motors drive the eActros with 125 kW each, the battery capacity was specified as 240 kWh. The official range of the eActros is 200 kilometres. However, the eActros used so far are pre-series vehicles undergoing field tests.


Meanwhile, Quantron is now offering the electrified Econic for various long-term rental, purchase, financing and leasing options. Quantron enables businesses and municipalities the chance to quickly and effectively move their fleets off fossil fuels, either through converting existing vehicles or acting as a supplier for existing electric commercial vehicles and batteries for CATL.

Quantron has already drawn attention to itself with the news that in future it wants to manufacture purely electric buses in Turkey with the Turkish bus manufacturer Karsan. In addition, the new German company will exclusively take over the Germany-wide distribution of Karsan’s Jest Electric and Atak Electric e-buses. At the end of last year, Quanton required only four to six weeks from order to delivery, which is “faster than any other supplier on the market,” Quantron said of its advantageous position. Shortly after this claim, Quantron proved its promised short registration times for Karsan models when the company announced that the first Karsan Otomotiv e-buses were already on the road in Germany. Both Karsan series buses are known to use batteries from the BMW i3. Besides distributing Karsan’s Turkish electric-buses, the company also converts Cobus’ electric airport buses, for example.

According to Quantron, in September last year, they expanded its sales network to include additional sales points in Rio de Janeiro, Lagos and Tel Aviv to meet international demand.

In addition to vehicle conversions, Quantron also offers new vehicles with electric drives as described above. The ties to commercial vehicle giant Iveco are particularly close. Only late last year, the company announced that it would start retrofitting smaller commercial vehicles with the Iveco Daily this month. Since 1978, the sixth generation of the Iveco Daily has covered the range from Iveco’s 3.5-ton class to the 7-ton class. The choice is between installing a hybrid or pure electric drive in either used or new models. The ties with Iveco explain a lot about this new company’s rapid expansion and excellent networks in the electric commercial vehicle sector – Although Quantron is a very new company, it was founded by Andreas Haller, 5th generation of the Haller family, running the 136-year-old company Haller, the Gersthofen-based Iveco service and workshop partner and commercial vehicle specialist.

Incidentally, the young company only announced another coup that will boost business at the beginning of the month: The Chinese battery cell manufacturer CATL has appointed Quantron as its authorised battery sales and after-sales partner for commercial vehicles and industrial applications in Europe. In other words: Quantron has recently started to act as an importer of CATL products and is now also relying on the new partner’s batteries for its retrofits.