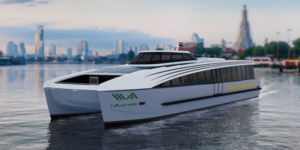 Danfoss Editron is supplying Energy Absolute with the electric propulsion systems for Thailand’s first fleet of all-electric passenger ferries that will operate on the Chao Phraya River. Each of the 24 meter long ferries can carry 200 passengers.

The vessels will each be equipped with two electric motors type EM-PMI375-T800 from Danfoss Editron, which will deliver a continuous power output of between 174 and 192 kW depending on the operating temperature. Energy Absolute is investing 33 million US dollars in the project, including the installation of quick-charging stations at ports, which will allow the batteries of the electric ferries to recharge in about 15 minutes. Two of the ferries are currently being tested. The remainder of the fleet is then scheduled to be delivered to operators within a year.

Danfoss Editron, Danfoss’ division specialising in hybrid and electric drive systems for off-highway and marine markets, is based in Lappeenranta, Finland. The marine specialists recently received two orders for their hybrid drive systems – one from the Norwegian shipyard Grovfjord Mekaniske Verksted (GMV) for a fleet of uncrewed exploration vessels and one from the Danish shipbuilder and operator MHO-Co for the UK’s first two so-called Crew Transfer Vessels (CTVs). Besides, Danfoss announced a contract with Infineon in parallel to the latter deal. And this is by far not the only link to Germany: At the end of 2019, Danfoss also signed a written agreement with ZF to intensify the existing cooperation between the two companies through a strategic partnership.