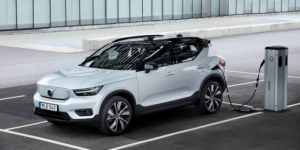 The order books remain open, however, so the electric XC40 can still be ordered. Delivery will just not take place until next year. Deliveries in Europe are scheduled to start in October – but Volvo does not specify in which country the first copies will be delivered to customers. As with the start of deliveries of the Polestar 2 a few weeks ago, the Scandinavian countries are likely to be the first to benefit. A statement from Volvo Car Germany states that the first vehicles on the German market are expected “by the end of the year”.

Volvo is producing the XC40 P8 Recharge together with the combustion and plug-in hybrid versions as well as the V60 on a single line in Ghent, Belgium. The pre-series models have already been assembled there in order to optimize the production processes – Volvo says it wants to offer consistent quality from the first customer vehicle. Prior to this, the employees involved were given extensive training in the safe construction of electric cars.

“Today is a momentous occasion for Volvo Cars and for all employees here in Ghent,” says Javier Varela, Head of Global Industrial Operations & Quality at Volvo. “As we continue to electrify our line-up, the Ghent plant is a real trailblazer for our global manufacturing network”.

The battery packs for the electric XC40 are also assembled in Ghent from purchased cells. A battery assembly facility set up specifically for this purpose was inaugurated in March. The cells are delivered pre-assembled in modules by LG Chem (from the plant in Poland) and by CATL – the customer should not be able to notice which supplier the cells in their XC40 P8 Recharge come from. A further battery assembly facility based on the Ghent model is also to be built at the US plant in Charleston.

The XC40 P8 Recharge, like its combustion counterparts, is based on the CMA platform from Volvo and Geely. This means that the XC40 uses the same modular system as the Polestar 2. In the case of the all-electric XC40, the latter also powers the electric sedan built in China. With two 150 kW electric motors, the XC40 P8 Recharge has a system output of 300 kW, the battery has a gross capacity of 78 kWh. This should enable a range of 400 to 418 kilometers according to WLTP in the Volvo. In contrast, the Polestar 2 will have a standard range of 470 kilometers.

From the Polestar 2, the electric XC40 also adopts an innovation in the interior: instead of Volvo’s own ‘Sensus’ infotainment system, the infotainment in the XC40 P8 Recharge (unlike the combustion and PHEV versions) is based on Google’s Android system. The system is designed to offer customers additional personalization options, intuitive usability and numerous integrated Google applications and services. Updates for software and operating system will to an even greater extent be wireless via radio.

Starting price for the electric XC40 is £53,155 in the UK, meaning it will not be eligible for the revised plug-in grant.