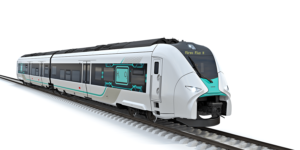 Siemens Energy and Siemens Mobility have signed a Memorandum of Understanding to offer hydrogen systems for trains and rail transport jointly. A timetable for development and the pilot projects has yet to be revealed.

Albrecht Neumann, CEO Rolling Stock of Siemens Mobility and Armin Schnettler, Executive Vice President (EVP) New Energy Business at Siemens Energy already signed the agreement. Since the IPO at the end of September 2020, Siemens Energy is no longer part of the Siemens Group. Still, Siemens AG is the largest shareholder of their spin-off, and Siemens Mobility GmbH remains part of Siemens AG.

With this research cooperation, the two Siemens daughters want to develop a solution to replace diesel-powered trains. Diesel trains are used on sections of the line without overhead contact lines, which in Germany is true for around 50 per cent of the rail network. In the UK, almost a third of the train fleet is entirely powered by diesel, and the government envisions a phase-out of such diesel-only trains by 2040. These are just two examples, and thousands of diesel-electric multiple units are to be replaced by more environmentally-friendly models throughout Europe over the next 20 years. Clearly, two companies see a business opportunity.

Teaming up with Siemens Mobility the new company wants to drive sector coupling by “developing, among other things, electrolysis and fueling solution for the fast fueling of hydrogen-powered trains,” added Siemens Energy Manager Schnettler. He also envisions the electrolysis of water using electricity produced from renewable energy sources.

The areas of responsibility are clear: Siemens Energy markets the systems and solutions needed for the generation and provision of green hydrogen, while Siemens Mobility focuses on rail transport solutions, including the required train maintenance and depot equipment. The two companies see that this will support customer acceptance of hydrogen power in the transport market.

Albrecht Neumann from Siemens Mobility explained that their business model goes much further than just selling H2 fuel cell trains: “Together with Siemens Energy, we can even offer hydrogen as a ‘hydrogen as a service’ model for a train’s service life”.

Initially, the two companies will jointly develop a standardized hydrogen infrastructure solution for fueling the hydrogen-powered trains of Siemens Mobility followed by pilot projects and real-world customer projects. A concrete timetable for development and pilot projects has not yet been announced.

In terms of fuel cell trains, Alstom has been making the news most recently as the Netherlands declared their solution a “fully viable alternative” to diesel trains. In Germany, two states are currently awaiting delivery of 40 such hydrogen trains of type Coradia iLint.

Peugeot e-Traveller van up for order in the UK