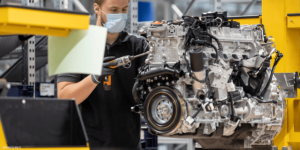 Daimler and its Chinese shareholder Geely are tightening the knots they share as they agree to cooperate in the development and production of hybrid drives. The two automotive groups intend to use synergies in their global research and development networks.

The stated aim is “a highly efficient powertrain system specified for hybrid applications” also designed to enhance their global competitiveness and create “true economies of scale”. Both parent companies, Daimler and Geely, list their respective automotive daughters, Mercedes-Benz AG and Volvo Cars in the announcement as they will utilise the new engines. The partners may also extend their reach to other Geely brands—which include Lotus, Lynk & Co, Polestar and Proton. Plus, there are Daimler’s existing partners in China: BAIC, Beiqi Foton and BYD.

Areas of potential cooperation, according to Daimler, include engineering, sourcing, industrialisation and efficiency measures. The companies will locate production at powertrain plants in Europe and China. Both partners also consider exporting the engine from China an option.

Markus Schäfer, Member of the Board of Management at Daimler commented, “together with Volvo’s ICE unit and Geely, we will further extend our synergies in the field of highly efficient drivetrain systems in China and the world.” He also said that Mercedes-Benz Drive Systems would “spearhead the project and create cost efficiencies.”


An Conghui, President of Geely Holding Group, also considered the development partnership “integral to our core competitiveness.” At Geely, electrification sits on the ‘Sustainable Experience Architecture (SEA)’ which the executive again considered “the core pillar,” also in regards to working with Daimler. SEA had been developed at Lynk &Co., here as a platform for fully electric vehicles.

In turn, the R&D initiative is embedded in the so-called Ambition 2039 strategy that sees Daimler striving for carbon-neutrality. At Mercedes-Benz, this means “Electric first” for the electrification of all models, now with the support of Geely, and still hybridisation.

While the company appear to intensify cooperation, initially Daimler had been reluctant. At least until Geely bought shares of 9.7 per cent in 2018 reportedly, a strategic acquisition that forced the Board to listen.

Now it appears they see the potential synergies indeed. It is a development that manifested earlier this year when Mercedes-Benz and Geely established a Chinese joint venture for the Smart brand. The JV called Smart Automobile Co, Ltd. will introduce the first fully electric Smart model in China in 2022. At the same time, Daimler will phase-out production in Europe, with the Hambach plant beginning to produce an electric car of the Mercedes-Benz compact class.