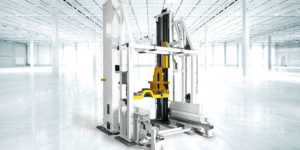 Most of the systems will be assembled at Kuka at the company’s home base in Augsburg, Germany, commissioned by, and then delivered to Hanover. As the Chinese-owned robotics manufacturer explains, they will implement the substructure of the ID.Buzz on an area of approximately 14,000 square metres. This includes substructures 1 and 2, including the associated subgroups. “Process technologies such as resistance spot welding, bonding, nut and stud welding are carried out in the 15 modular production lines,” Kuka explains. Among other things, what the company calls Kuka rack changers are used to supply the body components to the production line. The partners have not yet disclosed further information on the order value.

“Automated, intelligent systems are needed to meet the requirements for the cost-effective production of complex e-vehicles. Close cooperation between systems engineering and the automotive industry is more important than ever here,” says Gerald Mies, CEO of Kuka Systems GmbH.

With its know-how, Kuka explicitly wants to act as a partner of car manufacturers in the biggest transformation in the history of the automotive industry. The technology company, which was acquired in 2016 by the Chinese technology group Midea, has a long-standing cooperation with Volkswagen. Although Kuka was not involved in the recent award of contracts for more than 2,200 new robots for the future production of electric cars at the German VW plants in Emden and Hanover and the US plant in Chattanooga, the Augsburg-based company is also involved in other projects. The most recent example is the body construction plant for the ID. Buzz underbody

VW Commercial Vehicles will produce the new Multivan as a combustion engine and hybrid in Hanover from 2021 and the electric ID.Buzz, conversion work at the plant has already been underway for months. A few days ago, in the course of its latest investment planning round for 2021 to 2025, Volkswagen also announced that three fully electric D-SUV models for other Group brands would also be built in Hanover in the future.