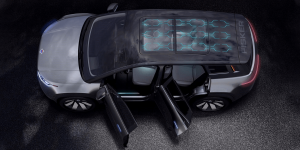 Fisker has announced plans to enter the UK market in 2023. The EV startup will be opening a customer experience centre in London in 2022 and has announced partnerships with Cox Automotive and Rivus Fleet Solutions for customer services.

The partnerships with Cox Automotive and Rivus Fleet Solutions will provide Fisker customers vehicle servicing, maintenance, deliveries, fleet management, valuations and reselling in the UK. The customer experience centre in London should allow potential buyers to make a tactile impression of the Ocean electric SUV, which will first be up for delivery in late 2022.

The US-American company led by Danish engineer Henrik Fisker has said that the UK will be one of the first markets to open for sales outside of the UK. Henrik Fisker said: “With recent UK government announcements related to electric vehicles, we believe Fisker will be well placed and well-timed to make significant progress in this important market.”

The UK has just introduced ‘green’ licence plates so that electric vehicle drivers can benefit from the special rights granted by local authorities. Last month, the British Government announced that the sale of combustion engines will be banned in the UK from 2030 onwards. Other pushes in increasing the uptake of electric vehicles, besides purchase subsidies, is the concerted effort to increase charging infrastructure.

This year, Fisker announced its plans to go public, which has seen the company share price increase from $8.96 in late October to a high of $21.61 since it was floated. Shortly afterwards the company announced plans for four electric models by 2025.

In the US, prices will start from $37,499 (currently around £28,010) before EV tax credits, but Autocar writes that the expectation is that the electric car will be around 20% more expensive by the time it goes on sale in the UK. Reservations in the USA opened in late 2019, and the

The contract manufacturer Magna announced a cooperation agreement with Fisker in October this year, which will include the assembly of the electric SUV Ocean, scheduled to start in the fourth quarter of 2022. Later the same month Fisker said it would be opening its European headquarters in Munich, Germany. The choice of location for the European headquarters called “Matrix” was also made because of its proximity to Magna’s production facility in Graz. The US-American company said that a customer experience centre in Munich will already open towards the end of 2021.