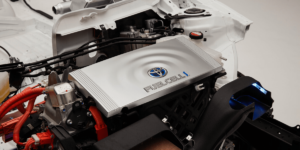 Toyota says that the aim of the new company is to promote the development of hydrogen ecosystems, including in the area of mobility, at other locations. In future, the Japanese company wants to manage its hydrogen activities in Europe from Brussels.

“The benefits of hydrogen are clear”, says Thiebault Paquet, Director of the new Fuel Cell Business Group. “That’s why we expect our global sales of fuel cell systems to increase by a factor of 10 in the short term, and why we have dramatically increased our production capacity”. He added that Toyota is investing significantly in the hydrogen economy, in increasing fuel cell production and in the organisation in Europe through next-generation vehicles, the opening of new markets and through technology applications.

In October this year, Toyota and eight other Japanese companies founded the “Japan Hydrogen Association” (JH2A) to promote the formation of a hydrogen supply chain and global partnerships in the hydrogen sector.

Hydrogen fuel cell technology is considered to be difficult to establish in the mass market of personally-owned cars by many competing car manufacturers and industry experts. Hydrogen technology in transport generally considered most advantageous to long-haul, heavy-duty vehicles that are otherwise difficult to decarbonise. The next-generation Mirai fuel cell car is scheduled for delivery from 2021 and is expected to boost sales by a factor of ten to 100,000 zero-emission cars. This is a big proposed leap since the current generation has only sold around 10,000 Mirai cars worldwide.


At the same time, using the same technology as in the next-gen Mirai, Toyota is launching a fuel cell truck with its commercial vehicle subsidiary Hino Motors. The 25-ton truck based on the Hino Profia was presented for the first time in March this year. In October this year, Toyota announced that its modular H2 propulsion solution REXH2 will be installed in the Hynova 40, a twelve-metre yacht for up to twelve passengers. Here, the fuel cell module is also based on the technology of the Toyota Mirai.

Toyota also uses its FC technology in city buses, forklifts and generators. In cooperation with Denyo, Toyota has developed a fuel cell commercial vehicle that uses hydrogen to generate electricity for outdoor concerts or natural disasters, for example, and to replace diesel generators. Also this year Toyota and Honda announced they are developing a mobile system called Moving e for emergency power supply in the event of natural disasters.

According to the company headquarters, the use of hydrogen technology in boats and trains is also already being tested. This will be nothing new to Europe, but no doubt welcome in a burgeoning industry across several transport sectors. A number of companies in Europe have begun looking into maritime uses for the hard-to-decarbonise shipping sector. Just last month the Norwegian shipbuilder Havyard found its own company to complete the development of its announced fuel cell system for large ships next year. ABB signed an MoU with Hydrogène de France (HDF) to jointly manufacture megawatt fuel cell systems for powering shipping vessels in April this year and just one year ago, Ballard Power Systems Europe announced the construction of a Marine Center of Excellence at its facility in Hobro, Denmark. Europe is also no stranger to the use of hydrogen technology in trains with companies like Alstom and Siemens Energy and Siemens Mobility.

To accelerate the spread of hydrogen, Toyota’s new business unit will focus on “hydrogen clusters” or ecosystems in European centres where transport fleets and mobility services are supported by local infrastructure. “Activities such as these will increase demand for hydrogen, reduce costs and strengthen the supply infrastructure, which in turn will attract more customers,” the vehicle maker said.