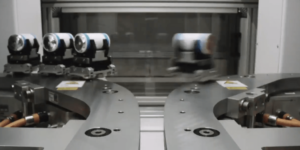 Although the preparatory measures may now begin at Grünheide for Tesla’s battery plant, the chance of federal German funding is still not lost. The German Federal Ministry of Economics and Technology (BMWi) submitted the second major European project for battery cell production to the EU Commission in December. The subsidies contained therein have not yet been examined and approved under state aid law.

According to Teslerati, the 4680 cell facility in Giga Berlin will become one of the world’s biggest battery factories when completed. Elon Musk says that the plant will have an output of 100 GWh per year. The website writes that Musk further said that Giga Berlin’s 4680 battery plant could be expanded to 200 to 250 GWh per year when fully ramped.

As usual, the funding is only available if the project could not have been implemented without funding, meaning that the actual construction cannot start beforehand. However “preparatory measures” will not exclude the possibility of funding.


After several misleading reports by the German boulevard newspapers BZ and Bild (translated headlines: “Tesla battery factory is approved ahead of schedule”), upon the request of the German website Teslamag, the German Federal Ministry BMWI clarified that there is no building permit and that the Ministry of Economics is not responsible for that. The correct information is that Tesla and other companies have applied for permission to prepare their projects within the EU funding framework for cell production, even though the approval under state aid law has not yet been granted. Tesla and other companies have been “allowed a provisional start of action” on its request to build the battery factory, according to a spokesperson for the Ministry of Economic Affairs, “meaning that companies are allowed to start preparatory work on their projects at their own risk.”

On Wednesday, Brandenburg’s Minister of Economics, Jörg Steinbach indicated in the state parliament that an application for cell production was not yet available. So far, the applications are probably mainly about the car plant, not the later-announced battery production.

Only at the beginning of this week, it was made public that Tesla had submitted a building application to the building authority of the local Oder-Spree district for another large hall on the same 300-hectare site in Grünheide. The building is to be used for other purposes on a transitional basis. Still, it will then house battery cell production for the Teslas manufactured next door, according to the  German newspaper Tagesspiegel. A spokesperson for the district office confirmed to the newspaper that the application for a warehouse was received shortly before Christmas. Still, there is not yet an application for a battery factory.

SVOLT cobalt-free batteries up for order