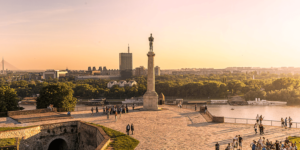 The Serbian capital Belgrade is aiming to invest a total of 5.2 billion euros by 2030 together with private stakeholders to reduce CO2 emissions and improve air quality. In doing so, the metropolis is also focusing on the electrification of the transport sector.

The city of Belgrade, with a population of 1.4 million, plans to address energy efficiency, renewable energy, wastewater, reforestation, sustainable mobility and pollution. In this context, drafts of a Green City Action Plan (GCAP) and a Sustainable Energy and Climate Action Plan (SECAP) have now been presented. Both roadmaps are aligned and pursue complementary goals.

The city does not intend to raise the necessary investment sum of an estimated 5.2 billion euros on its own. In the context of the draft action plan, it is proposed that the city take on just under two-thirds (64 per cent) of the investment, or a good 3.3 billion euros. The remaining 36 per cent is to be covered by private investment.

The drafts are currently open for public inspection and will remain so until 17 March. In drawing up the plans, the city worked together with the European Bank for Reconstruction and Development under its ‘Green Cities’ program.

US Democrats to invest billions in e-mobility annually