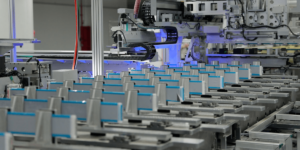 BYD is preparing its first battery factory in Europe and is already looking for engineers. However, the Chinese company is not yet disclosing important key data such as the planned location, timetable or production capacity.

What is clear, however, is that the planned factory will build cells for electric cars and not for BYD’s Hungarian electric bus plant. “The plan for the plant is to prepare for delivery to European automotive customers and the further expansion of BYD’s overseas business,” a BYD representative told Reuters.

Also not yet confirmed is which cell technology BYD plans to manufacture there. It is likely – but not yet confirmed – that it will be the ‘Blade Battery’, i.e. LFP cells. This battery is also used in the Tang EV, which the company sells in Norway.

BYD had presented the ‘Blade Battery’ in March 2020 and touted it as particularly safe. So far, the cells are installed in the Tang electric SUV (also for China) and the electric version of the Han sedan. Also in 2020, BYD had announced the component brand FinDreams, through which BYD developments such as the ‘Blade Battery’ are to be offered to other carmakers.

It became known this week that BYD and Hyundai Motor Group are apparently negotiating the supply of the LFP cells. According to South Korean media, however, Hyundai wants to use the ‘Blade Battery’ primarily in its China models.

BYD, based in the southern Chinese city of Shenzhen, sold 426,972 vehicles in 2020, including 189,689 electric vehicles. The batteries for these came from its own production.