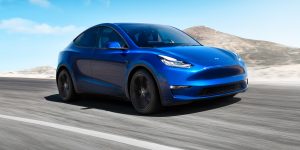 Tesla does not break down the deliveries by region or more than model groups (Model S/X and Model 3/Y). Still, it is safe to assume China, in combination with the incentives in Europe, had a big impact, especially on sales of the Model Y. Indeed, the company in their report refers to “the strong reception of the Model Y in China,” where Tesla is also “quickly progressing to full production capacity.”

For production, Tesla produced a total of 180,338 vehicles in the first quarter of 2021. This, too, is a new record, besting the 179,757 units made in Q4/2020. What is more, this time, production was made up of exclusively Model 3 and Model Y. Tesla had put the Model S and X production on hold this year to prepare the lines for the revised versions presented at the end of January. The company, in an update, said, “The new Model S and Model X have also been exceptionally well received, with the new equipment installed and tested in Q1, and we are in the early stages of ramping production.”

As usual, the delivery data is only a first indicator for the quarterly results and earnings yet to come. Tesla went from strength to strength here, having recorded a profit in six consecutive quarters with 2020 being their first profitable year since inception.

The company now operates on a target of 50 per cent annual growth for its deliveries in future, and Tesla says it likely will “grow faster” in 2021. Growth at 50% this year would mean the delivery of about 750,000 vehicles or 187,500 per quarter, assuming an unrealistically even distribution. That goal does not seem too far off, given that the Model X and S have yet to come back in. Plus, if the Gigafactories in Germany and Texas really come online as planned in 2021, there would be extra vehicles right there.