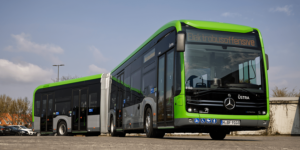 Mercedes is now equipping its eCitaro G electric articulated bus with a more powerful generation of lithium-ion batteries. The first eCitaro G of the new type have been delivered to the ÜSTRA transport company in Hanover as part of a major order for a total of 48 eCitaro.

Daimler had already announced that the electric articulated bus would receive a new generation of batteries when it presented the eCitaro G last autumn. The capacity of the second generation is about a third higher than that of the previously used batteries and thus significantly increases the range. The two articulated buses now delivered for Hanover are equipped with ten battery assemblies, resulting in a total capacity of 330 kWh. In addition, they have pantographs on the roof for intermediate charging at terminal stops.

However, the ÜSTRA has not opted for the maximum possible battery configuration. As Daimler announced in September 2020, the maximum possible capacity is to increase from 292 to 396 kWh with the generation change. Daimler is taking a two-pronged approach to the battery strategy for the articulated bus: in addition to the up to 396 kWh NMC batteries, there is also a lithium-polymer battery pack with solid electrolyte and a total capacity of 441 kWh. These cells are supplied by the French company Blue Solutions.

Daimler justifies the two-pronged strategy with the different properties of the batteries and the associated application possibilities. The solid-state batteries are said to be suitable for fast charging “only to a very limited extent”, but with the 441 kWh the eCitaro G is supposed to guarantee “ranges for typical urban bus use”. If the route requires intermediate charging at the bus stop or in the depot, for example in rural or hilly areas, the version with the 396 kWh NMC batteries is a good choice, according to Daimler.


Since ÜSTRA wants to be able to recharge quickly with the pantograph chargers, the NMC batteries will therefore be used in Hanover. The 48 vehicles on order – 30 solo and 18 articulated buses with electric drive – will be delivered in stages until 2023. The first two eCitaro G (albeit still with the old battery) have already been on the road in Hanover since September 2020. Analogous to the deployment of the other electric buses, the ending points of the city centre bus routes will each be equipped with the necessary charging infrastructure by 2023, and the two bus depots will be extensively converted for the charging and maintenance processes of the electric buses.

“Our new, state-of-the-art articulated buses are making an important contribution to climate protection and the transition of transportation away from combustion engines,” says Denise Hain, ÜSTRA Director of Operations and Human Resources. “They are an important element of climate-friendly mobility in Hanover.” As Daimler calculates, the conversion can save 3,800 tonnes of CO2 per year.

ÜSTRA operates 349 light rail vehicles, 142 buses and four electrically powered ships. The buses cover more than twelve million kilometres a year on 41 lines with a length of 540 kilometres and 672 stops.