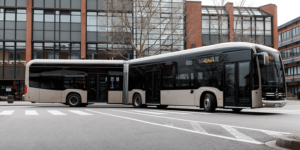 The Mercedes eCitaro G articulated bus has celebrated its world premiere. The electric bus is now also optionally available with solid-state batteries that can provide a range of up to 220 kilometres. Mercedes has also revealed more on the series production of the eActros.

Daimler has already published most of the performance data, engine and battery options for the eCitaro G in advance. The eCitaro G’s motors close to the wheel hub have a maximum output of 2 x 125 kW per axle, similar to the 12-meter solo bus, and the torque is 2 x 485 Nm.

Initially, the eCitaro G also relies on the batteries that are familiar from the solo bus. However, the changeover to a new generation of NMC cells is to take place this year, and will increase the capacity from 292 to 396 kWh. Also available for selection as mentioned above: a lithium-polymer battery parquet with solid electrolyte and a total capacity of 441 kWh.

Daimler justifies its twin-track strategy with the different properties of the batteries and the associated application possibilities. The solid-state batteries are said to be “only very limited” in terms of their suitability for rapid charging, but with the 441 kWh, the eCitaro G should guarantee “ranges for typical city bus use” allowing for overnight charging at the depot.

According to Daimler, the version with the 396 kWh NMC batteries is the best choice if the route requires interim charging at the bus stop or depot, for example in rural or hilly areas.

According to current information, the batteries are charged as standard by DC charging via plug and a charging capacity of up to 150 kW. The plug is located on the right side above the wheel arch of the front axle. From next spring onwards, it will be possible to have additional plug positions on the left-hand side of the vehicle or in the rear. The eCitaro is now also available with an alternative pantograph with either the solo or the articulated bus. Another variant comes with charging rails for charging with stationary pantographs. With these two variants, the charging capacity doubles to up to 300 kW.

Just a few days ago, Daimler announced that the bus variant with solid-state batteries would have a standard basic warranty for up to ten years or up to 280 MWh energy throughput per battery pack, which this applies to both the articulated and solo buses. The next step for the eCitaro family is scheduled for 2022, by which time both versions will also be available with a fuel cell as a range extender. In this way, Daimler Buses intends to make intermediate charging and the necessary infrastructure superfluous “in almost all cases”. But public transport operators will then have to calculate what is cheaper: some well-placed quick chargers or a hydrogen tank infrastructure.

Site and production manager Dr Matthias Jurytko says that the plant in Wörth is currently working hard to prepare for the demands of truck production in connection with electric drives: “For example, we are currently training our future specialists in the field of high-voltage systems – a fundamental area of expertise as far as the assembly of automotive batteries and the construction of electric trucks is concerned.”

With a range of 200 kilometres, the eActros is set to stir up heavy urban distribution traffic from next year. The model is currently still in the second test phase with selected customers. In Wörth, the electric truck models will be flexibly scheduled for assembly alongside trucks with conventional drives from next year. The basic structure of the vehicle will be built on a conveyor belt, while the installation of non-conventional drive components will take place in a separate process. The vehicles will then be reintegrated into the regular production process for finishing and final acceptance.

With reporting by Cora Werwitke, France.