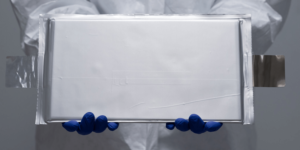 The American company Factorial Energy has announced a 40 Ah cell with solid electrolyte that is supposed to help electric cars increase their range by 20 to 50 per cent. The management team and investors of the as yet unknown company include some well-known names in the industry.

But first, let’s talk about the cell itself: The company, which has made its first ever public appearance with the announcement this week, is not yet giving many details about the batteries. At the core of the plans is “Factorial Electrolyte System Technology” (FEST), which is a solid electrolyte material developed in-house to enable safe and reliable cell performance with high-voltage, high-energy-density electrodes.

The breakthrough material is “safer than conventional lithium-ion technology, replacing the combustible liquid electrolyte with a safer, more stable solid-state electrolyte that suppresses lithium dendrite formation on lithium-metal anodes,” Factorial says in the release. The only figure cited is that FEST-based battery platforms are said to offer a 20 to 50 per cent improvement in range without compromising pack longevity.

According to Bloomberg, this involves a special polymer separator. Factorial gave further data to the news agency that was not included in the announcement. Currently, the cells would come to a gravimetric energy density of 350 Wh/kg and a volumetric energy density of 770 Wh/l. The target is 400 Wh/kg and 1,000 Wh/l. After 460 cycles, the capacity should drop below 80 per cent, and the cells should be able to be charged at 1C.

While Factorial is well above what other solid-state battery developers have currently announced in terms of cell capacity at 40 Ah, Factorial is slightly behind its competitors in terms of other values. Oxis Energy plans to mass-produce solid-state lithium-sulphur cells with 450 Wh/kg from summer 2022 (but only with 10 to 20 Ah). VW partner QuantumScape has not yet given any information on energy density, but wants to achieve more than 800 cycles with its cells before the capacity falls below 80 per cent.

Announcements of this kind have been plentiful, but the team behind Factorial Energy certainly makes one sit up and take notice: Joe Taylor, a former CEO of Panasonic North America, has been appointed Executive Chairman. Taylor allegedly played a key role in setting up the cooperation between Tesla and Panasonic that led to joint cell production. The executive chairman is the chairman of the supervisory board (comparable to the German supervisory board), but as “executive chair” he also assumes a management function over the company’s business that is independent of the CEO.

The company’s investors include former Ford president Mark Fields and Harry Wilson, who was an advisor to the Obama administration. And the company’s board of advisors includes another prominent name: Dieter Zetsche, the former head of Daimler.