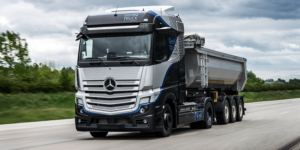 Daimler Trucks just began intensive testing of the advanced prototype of its fuel cell truck GenH2 Truck, which was unveiled in September 2020. The prototype is still making the rounds on a test track, but soon it will also be on public roads.

Daimler wants to achieve ranges of 1,000 kilometres and more with the GenH2 Truck. This is made possible not only by the fuel cell but also by liquid hydrogen cooled to -253 degrees Celsius. This makes it possible to achieve higher energy densities than with high-pressure storage of gaseous hydrogen.

The focus of the test series is, among other things, continuous operation, different weather and road conditions, as well as various driving manoeuvres, as Daimler has now announced. The development plan of Daimler Trucks foresees tests on public roads before the end of this year. Customer trials are scheduled to begin in 2023, and the first production vehicles of the GenH2 Truck are to be handed over to customers from 2027.

“We are consistently pursuing our technology strategy for the electrification of our trucks. We want to offer our customers the best locally CO2-neutral trucks — powered by either batteries or hydrogen-based fuel-cells, depending on the use case,” says Martin Daum, Chairman of the Board of Management of Daimler Truck AG. “We’re right on schedule, and I’m delighted that the rigorous tests of the GenH2 Truck have started successfully.”

According to the manufacturer, the durability tests will place the same demands on the vehicle and components as a comparable diesel truck. So the vehicles are designed for 1.2 million kilometres, ten years of operation and 25,000 operating hours. In the first weeks of testing, the GenH2 truck completed endurance tests on the roller dynamometer and practical load tests such as full braking or driving over kerbs on the test track. The prototype is not travelling empty, but with a payload of 25 tonnes, it has a total weight of around 40 tonnes.

As the developers point out, the challenges are greater with the GenH2 truck because it is a vehicle designed from scratch with new components – which react differently under load. “In addition, the new components’ specific weight and position in the vehicle affect the truck’s handling properties,” Daimler writes. “As a result, different forces act on the truck than on conventional vehicles in the event of vibrations caused by road bumps and especially in extreme situations.”

However, one new component is not yet used in the current tests: the tank for the liquid hydrogen. There is no refuelling solution yet, so the prototype runs on gaseous hydrogen – which makes no difference to the fuel cell. By the end of the year, the Daimler engineers want to have reached a “corresponding degree of maturity” with the tank system so that further vehicle tests can be carried out with liquid hydrogen. As reported, the partner here is Linde.

Daimler truck CEO Daum emphasises that the hydrogen-based fuel cell drive will be “indispensable in the CO2-neutral long-distance truck transport of the future”. He had already made similar statements a few weeks ago when Daimler Truck officially launched the fuel cell joint venture Cellcentric with Volvo. In contrast, the commercial vehicle manufacturer Traton, which belongs to the VW Group with the MAN and Scania brands, is now also relying on battery technologies for long-distance transport.