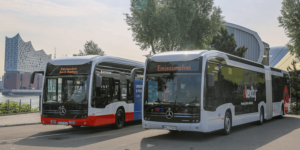 The duo is scheduled to enter regular passenger service in the next few days. Both electric articulated buses are part of large orders: Mercedes-Benz is currently supplying 37 eCitaro to Verkehrsbetriebe Hamburg-Holstein and 34 eCitaro to Hamburger Hochbahn. The two orders include both solo and articulated buses, both of which are follow-up orders after meanwhile extensive practical experience with eCitaro vehicles in daily use in Hamburg.

The two new electric articulated buses each have seven battery packs with solid electrolyte and an energy content of 441 kWh. The Bolloré subsidiary Blue Solutions from France acts as the supplier of the solid-state batteries. The range of the buses is almost 200 kilometres, guaranteed by the manufacturer, depending on the operating conditions. With a length of 18 metres, the vehicles can carry around 100 passengers. The electric articulated buses are charged via a plug in the depot.

The design of the two buses is identical except for a few details: both have four doors, an identical seating arrangement and three special use areas for prams and wheelchairs. The doors of the driver’s cabs are equipped with separating discs across the entire width.

This year, the transport companies in Hamburg are purchasing a total of 94 e-buses. At Hochbahn, there are 17 articulated and 29 solo buses, at VHH 30 and 18 respectively. Since 2020, both companies have been ordering electric buses exclusively. Not only from Mercedes, but also from MAN, Irizar and Volvo (in the case of VHH) and MAN and Solaris (Hochbahn). The total fleet of both companies is around 1,700 vehicles: Hochbahn has around 1,000, VHH almost 700.