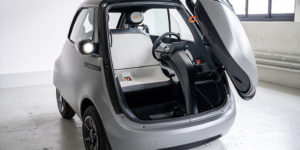 Micro Mobility Systems provides another update on the development of its Microlino 2.0 light electric vehicle: The near-series third prototype now features a folding roof. The Swiss company also founded a company together with partner CECOMP that will help to produce in Turin.

According to Micro Mobility Systems, the development of the electric cabin scooter has entered its final phase, which also entails concrete preparations for production. To this end, the developer and CECOMP have now launched a production company called Microlino Italia. In February, the Swiss had already announced that homologation and EU road approval for the model would be completed in August of this year and production would start shortly afterwards in September. In the current update, Micro Mobility Systems does not mention any timetables to the contrary.

The assembly line will be located at CECOMP’s La Loggia site in Turin. Already parallel to the prototype phase, the partners have had the first tools produced in order to “lose as little time as possible”. More than a third of the moulds for the chassis and the body are already ready, the duo now reports. “At the beginning of the Microlino project we never wanted to be manufacturer ourselves but we realized that this is the only way to control the quality and at the same time reduce the cost of production,” says Merlin Ouboter of Micro Mobility Systems, commenting on the founding of the joint manufacturing company Microlino Italia.

According to Ouboter, the third prototype, which has now been completed, is already very close to the series version in terms of exterior and interior design. It has a completely redesigned interior with two displays, one behind the steering wheel as a speedometer and a smaller touch display integrated into the centre bar to control functions such as the heating.

Another innovation is a folding roof developed in cooperation with Magna Car Top Systems, which “can be easily opened and closed with one hand while driving”. The folding roof will be available as an option, and in the premium versions of the electric microcar, it will be included as standard. Finally, the developer announces it has completely eliminated the door handle. “Like on the new Ford Mustang Mach-E, we have eliminated the front door handle completely to simplify the design even more. To open the door, you need to unlock the car with the key and press a small button below the headlight. This will pop up the door just enough for you to grab the door to fully open it seamlessly. To open the door from the inside, there is another button located at the back of the aluminium handlebar, which activates the door mechanism.”

In its previous updates in December 2020 and February 2021, Microlino had announced a total of five prototypes. With the current third one, Microlino wants to conclude the prototype phase. Prototypes 4 and 5, which will already be pre-series models, are to follow in the summer. The company then wants to start the homologation process with these vehicles.

After the out-of-court settlement with Artega and TMI in the case of the Microlino clone Karolino (which is now sold as Karo-Isetta) announced in January 2020, Micro Mobility had in turn announced that it would bring a further developed version of the Microlino to series production readiness with the Italian company CECOMP. The team named the visually and technically revised model Microlino 2.0, which, according to Merlin Ouboter at the time, should have “much better handling, better ergonomics, better repairability” and also be “producible in large numbers”. After the cancellation of the Geneva Motor Show in spring, the Swiss company presented the small electric car virtually in February 2020.