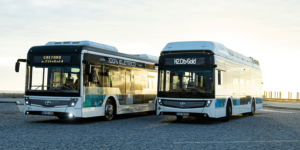 The Portuguese bus manufacturer CaetanoBus has agreed on a co-branding with Toyota. In future, the logo of the Japanese mobility group will adorn both the battery-electric city bus e.City Gold and the fuel cell bus H2.City Gold from CaetanoBus.

For the hydrogen-powered model, Toyota has already been supplying the hydrogen part of the electric powertrain since 2019. This includes the hydrogen tanks, fuel cell stacks and other “key components familiar from the Mirai sedan”, according to Toyota. There is no such technology cooperation for the battery-electric buses.

Nevertheless, there is a connection between the two companies that goes beyond the FC components: via the joint venture Toyota Caetano Portugal (TCAP) founded by Toyota Motor Europe (TME) and Salvador Caetano, the company has been a direct shareholder in CaetanoBus since December 2020.

The fact that all of CaetanoBus’ electrically powered buses will nevertheless bear a Toyota logo on the front in future is also intended to increase recognition among European customers – the Toyota logo is incomparably better known globally than that of CaetanoBus.

“The co-branding of CaetanoBus zero-emission buses shows the confidence we have in our latest investment and our longstanding partnership with Caetano,” said Matt Harrison, president and CEO of Toyota Motor Europe. “It also underlines the importance that Toyota places on developing zero-emission mobility beyond cars, on our path to carbon-neutrality.”