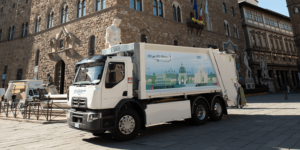 The D Wide Z.E. is a variant of Renault’s electric truck specially optimised for waste transport. According to the French company, this segment is particularly suitable for electrification because, among other things, the routes that can be planned and the particularly frequent starting and braking in everyday operation is more ideally suited to an electric drive.

The vehicle in Florence is the first electric truck from Renault Trucks on Italian roads. This is mainly due to the environmental policy from mayor Dario Nardella. He says that in order to reduce air pollution, he has, among other things, introduced streetcar lines, expanded bicycle lanes, set up charging stations and purchased electric buses, and the first electric waste disposal truck.

“Florence has begun its green revolution”, explained Mayor Nardella. “The arrival of this Renault Trucks vehicle coincides with our determination to boost electric mobility in the city centre, with the aim of improving air quality and reducing noise pollution and, ultimately, helping to preserve our cultural heritage”

The electric truck was procured by Gorent. The company specialises in the rental of city cleaning vehicles. This makes it likely that the first deployment in Florence will be followed by other customers. “We are focusing our efforts on reducing CO2 emissions and making practical choices to achieve this,” says Furio Fabbri, Gorent’s managing director.

The D Wide Z.E. has two electricmotors with 260 kW continuous and 370 kW peak power as well as 850 Nm torque and a battery pack with 200 kWh capacity on board. Power transmission is handled by a 2-speed gearbox. The vehicle is charged with up to 20 kW AC and 150 kW DC.

Late last year, the French truck maker announced new battery options for its all-electric D Z.E. (16-tonne) and D Wide Z.E. (26-tonne) truck models. Just a couple of months before, the company had announced financing options through Renault Trucks Financial Services, the company’s leasing subsidiary. In May this year, Renault Trucks revealed an order for a further ten Renault electric garbage trucks after the Paris suburb of Neuilly-sur-Seine trialled one D Wide Z.E. that had been used as a refuse collection vehicle for almost a year.