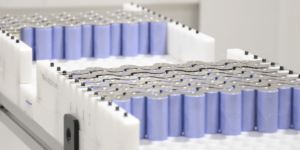 The UK Battery Industrialisation Centre (UKBIC) has now been officially opened in the English industrial city of Coventry. The £130 million, 18,500 square metre facility is designed to support UK industry in the development of battery technologies for electrification.

The UKBIC is a national facility that “can be used by all companies working on batteries for electric vehicles, rail, aerospace, industrial and domestic appliances, and static energy storage,” according to a statement from the centre.

The centre will primarily serve to prepare for mass battery production. Prime Minister Boris Johnson officiated at the opening of the facility. He commented on the inauguration as follows: “This facility will help to deliver green growth and jobs as industrial demand accelerates in the UK battery sector. With the technology and government-backed expertise on offer right here in Coventry, I have no doubt that UKBIC will become world leaders in the industry.”

The facility employs more than 80 battery technicians, engineers and support staff, according to the release. This is set to increase as it plans to forge project partnerships with industry and research organisations, it said. Among the OEMs planning to take up the offer is Jaguar Land Rover (JLR). The carmaker announced that it would develop a prototype of the Land Rover Defender with fuel cell propulsion and cooperate with the UKBIC, among others, a few weeks ago.

The location of the centre has undoubtedly been chosen with care: The West Midlands, with Coventry as its industrial heart, is home to several car manufacturers, including Jaguar Land Rover, but also Aston Martin Lagonda, BMW and LEVC. The construction of a battery gigafactory is also planned at Coventry Airport. However, a final decision on the project is not expected until later this year.

Meanwhile, the UKBIC is a central component of the government’s ‘Faraday Battery Challenge’ programme, which aims to accelerate the commercialisation of future-proof batteries. In addition to funding from this pot, the battery centre was also co-funded by the West Midlands Combined Authority. Acting as the UKBIC’s governance is a consortium of Coventry City Council, the Coventry and Warwickshire Local Enterprise Partnership and WMG, an academic department of the University of Warwick.

Jeff Pratt, UKBIC’s managing director, points out that the centre’s battery manufacturing equipment covers the entire production process – “from electrode manufacture, through cylindrical and pouch cell assembly, to formation ageing and testing, and battery modules and packs”. The facility, he said, is also a training centre to further educate the UK battery sector. “The importance of the battery sector to the UK economy cannot be underestimated. The Faraday Institution predicts that the equivalent of seven large gigafactories will be needed in the UK, and employment in the automotive industry and battery supply chain could rise from 170,000 to 220,000 by 2040,” Pratt said.

The UK is pursuing ambitious climate targets. The island is aiming for CO2 neutrality by 2050, and in the transport sector no more petrol and diesel cars and vans are to be sold from 2030. For trucks, the ban on combustion engines is to apply from 2040.