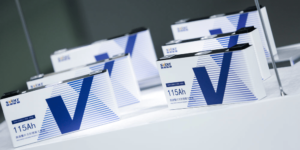 SVOLT has started series production of its novel cobalt-free nickel-manganese battery cells (NMX) in Jintan, China. The cells could also be produced in the planned plant in Saarland for the European market by the end of 2023.

According to SVOLT, two sizes of NMX batteries (115 Ah and 226 Ah), whose chemistry consists of 75 per cent nickel and 25 per cent manganese, will initially be produced in China. SVOLT had already announced the two versions at the order launch of the NMX cells in January 2021, at which time ten tonnes of the newly developed cathode material could be produced in pilot production. Series production of the cathode material has been running since April.

The manganese content in this cathode material is higher than in NCM811 cells. Cobalt, which is normally used in NCM cells for thermal stabilisation, is not used in the new cells. Instead, the cathode is stabilised by “specially developed doping and coating processes”. Thus, the NMX cells – even without cobalt – are said to offer a “higher thermal stability as well as overall safety than NCM811 cells”.

With the help of the new technology, SVOLT says it has also succeeded in significantly improving the cycle ageing and calendar ageing of NMX cells compared to conventional NCM battery cells. Thus, more than 2,500 charging cycles can be achieved. Assuming a range of 400 kilometres for an electric car with these cells, this would result in a mileage of one million kilometres.

Due to the fact that the controversial cobalt is not used, the manufacturer claims that the cells are not only more sustainable, but also five percent cheaper than NCM battery cells. This means that, despite the new technology, they are not only suitable for expensive luxury-class vehicles, but also for the mid-range.

The first electric vehicle model to use SVOLT’s new NMX cells is the Ora Cherry Cat from Great Wall Motors. This is a 4.51 metre long SUV with a 2.71 metre wheelbase. The vehicle will be offered with both the new NMX cells and SVOLT’s cheaper LFP cells.

From the end of 2023, the novel batteries can also be produced at the planned plant in Saarland for the European market. “SVOLT is the first company that has succeeded in bringing a cobalt-free high nickel cell chemistry to mass industrial production readiness,” says Kai-Uwe Wollenhaupt, President SVOLT Europe & Vice President SVOLT Energy Technology. “The team in China has now impressively demonstrated this by starting series production. Our high-performance and low-cost battery cells without cobalt are an important milestone on the road to sustainable electromobility.”