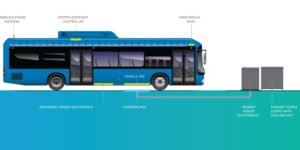 Wave’s system is already used by several electric bus operators in the USA and currently offers a charging capacity of up to 250 kW. According to information from a recently published document, this is to become 500 kW and then 1,000 kW in the future. The document of a tender by the US Department of Energy was published on Twitter. A time frame by when the 500 kW or the 1,000 kW charging capacity is to be achieved is not known.

This means that the expansion stages planned by Wave correspond relatively exactly to the order of magnitude that Tesla is targeting for the megachargers. That being said, not much more than the maximum charging capacity of 1 MW is known for the planned Tesla charging stations for the Semi but these will probably be cable-based.

Wave intends to increase the charging power of its 250-kW system through new electronics and a new design of the coil. On the infrastructure side, a large primary coil is to be embedded in the ground, and the receiver plate on the underbody of the vehicle is to be up to 25 centimetres away. Information on the efficiency with this air gap is not known.

According to Wave, it is clear that the charging power for long-distance e-trucks will advance into this order of magnitude. To this end, the company refers to information Tesla has provided on the Semi. “The recently announced Tesla Semi concept design has the largest advertised range of 500 miles with a target 80% charge in 30 minutes,” Wave calculates, “The battery pack is estimated to be at least 800 kWh (likely much higher to cover full load and all conditions) and must have a target charge rate of at approximately 1.5 MW.”

In the mobility industry, some companies are working on inductive charging solutions, but mostly the charging rates are more in the range of AC charging – inductive charging technology has not yet caught on in the masses. At the beginning of July, Tesvolt announced its intention to enable “inductive supercharging with up to 200 kilowatts of charging power” in the medium term after acquiring a stake in the specialist Stercom. Later the same month, Momentum Dynamics announced that they have already installed a 300 kW in the US state of Washington. This involves three additional inductive charging systems (in addition to the 200 kW wireless charger already in operation) for the Link Transit authority electric bus fleet in Wenatchee. Charging capacities of up to 300 kW mean that electric buses can be charged wirelessly within a few minutes.

With additional reporting from Carrie Hampel