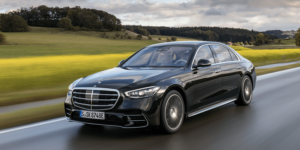 Daimler’s focus on battery-electric vehicles also has an impact on plug-in hybrids. The Stuttgart-based carmaker is no longer planning any new developments here. Suppliers such as ZF, however, assess the future of PHEVs differently.

Since only purely electrically powered cars are to be sold under the Mercedes-Benz brand by the end of the decade reportedly, not only the pure combustion engines but also the partially electrified cars have a fixed end date. Markus Schäfer, Daimler board member responsible for research and development and Mercedes-Benz AG board member responsible for day-to-day operations, now indicated at the IAA Mobility in Munich that there will be no further development of a technology once deemed transitional.

“No further new developments are planned,” Schäfer said at the show. “The investments have been made, to that extent, we are using them.” In other words, new hybrid powertrains that go beyond the electric ranges of the current models will not be coming. Instead, Schäfer sees the complexity of two powertrains in one vehicle as “a cost burden for the vehicle”.

Mercedes has recently accelerated its shift to electric mobility and will introduce only purely electric vehicle platforms from 2025. To illustrate the change, the Stuttgart company has subordinated its trade fair appearance in Munich entirely to electromobility: For example, the EQE was presented at the IAA Mobility, along with the AMG version of the EQS, the European debut of the EQB and the concepts for an all-electric G-Class and a Maybach luxury SUV.

But not all industry representatives see the end of plug-in hybrids by the end of the decade. ZF CEO Wolf-Henning Scheider told Reuters at the show that, based on his own order book, he expects PHEVs to play an important role in the electrification of individual mobility “well beyond 2030 in many parts of the world”. Scheider anticipates increasing purely electric ranges of more than 100 kilometres.

However, ZF is also working on the purely electric future: at the IAA, the supplier presented the ‘Modular eDrive Kit‘, a construction kit for purely electric drives. This is intended to cover numerous vehicle segments from compact cars to luxury models – and to be able to implement the right solution for the customer in half the development time.

Hyundai to end ICE model sales in Europe by 2035