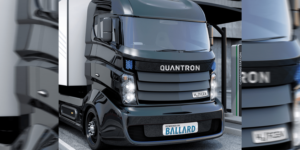 Ballard Power Systems and Quantron AG become strategic partners in the development of fuel-cell powered trucks. Independently of this, Quantron announces that it will launch a twelve-metre-long low-floor bus as a BEV – and a little later also as an FCEV – from the end of the year.

The freshly sealed cooperation between Ballard and Quantron will initially focus on the integration of FC modules from Ballard’s FCMove product line in the Augsburg-based company’s electric vehicles, which include a 7.5-tonne delivery van, a 44-tonne heavy-duty truck and a municipal waste disposal vehicle.

According to Ballard, the FCMove platform integrates FC modules based on its FCgen LCS stacks, where LCS stands for “liquid cooled stack”. Ballard gives the power output as 70 kW. It is a “compact, fully integrated, robust fuel cell energy solution that is specifically tailored to the requirements of commercial vehicle operators”, the manufacturer states. The same system is used in Solaris FC buses, for example.

Andreas Haller, founder and CEO of Quantron AG, describes his company’s cooperation with Ballard as “another important milestone for Quantron’s global growth”. He says the partnership will enable the company to bring customised hydrogen commercial vehicles with fuel cell electric drive systems to market. “Today we embark on a journey of joint development and production of fuel cell electric commercial vehicles,” Haller added.

“Ballard is looking forward to collaborating with QUANTRON to accelerate the adoption of fuel cell technology for truck applications,” concurs Robert Campbell, chief customer officer of Ballard Power Systems. “The combination of both companies’ expertise will deliver high performance hydrogen trucks to respond to the growing demand for zero emission vehicles from fleet operators and unlock new business opportunities for medium and heavy-duty fuel cell trucks in Germany,” notes Campbell.

The first delivery of Quantron fuel cell trucks in Germany is scheduled for the second half of 2022, according to the latest announcement. Last year, the company had already announced the development of a heavy hydrogen truck and an H2 transporter in quick succession. Otherwise, the Augsburg-based company is focusing on battery-electric drives in commercial vehicles – including plug-in hybrids.

In addition to the FC trucks themselves, the associated ecosystem will also be made available to customers in the future. Against this background, Quantron agreed on a cooperation with the hydrogen specialist H2Go GmbH in June. The duo wants to put together a complete package of hydrogen mobility solutions. Specifically, H2Go and Quantron aim to put together customised solutions from a modular system of products and services.

Independently of the hydrogen ambitions, the Augsburg-based company also announced the launch of an electric 12-metre low-floor bus for public transport. The Quantron 12 will be offered in two versions: The BEV version of the vehicle can be ordered from the end of 2021, and the FCEV version from spring 2022, according to Quantron. And: The zero-emission bus should be in a “similar price range as conventional diesel buses”. However, the company does not get more specific at this point.

Quantron says it will offer the vehicle in close cooperation with its investor and strategic partner Ev Dynamics. The European-Asian consortium only recently joined Quantron in the course of a share swap. On the occasion of the transaction, the partners announced in mid-August that they intend to jointly bring BEV and FCEV vehicles to the market. Quantron will be responsible for product development, Ev Dynamics for production.

The BEV version of the Quantron 12 will have a maximum power of 250 kW, a torque of 3,400 Nm and a maximum battery capacity of 422 kWh. Quantron states the range of the city bus at 160 to 280 kilometres (depending on the number of battery packs), the DC charging power at 80 kW. Charging via CCS takes three to six hours – also depending on the battery size, the company says. The bus can also carry up to 95 passengers. And: The equipment as well as the interior and exterior design are available in a variety of specifications.

The model is already in operation in the Far East. “Several thousand buses have already been produced. These have been operating successfully in Asia for years,” says Miguel Valldecabres Polop, CEO of Ev Dynamics. A few weeks ago he said that one of the things he appreciated about Quantron was its “excellent market access in Europe”. Ev Dynamics describes itself as a “major player in the Chinese market for battery and fuel cell electric commercial vehicles”. Formerly known as China Dynamics, the group is a provider of integrated powertrain and logistics solutions and has a production facility in Chongqing as well as a sales network in China, Hong Kong, the Asia-Pacific region and South America.

The partners do not provide any further details on the fuel cell version of the bus in their statement.