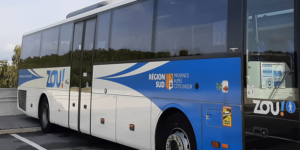 The French Région Sud has commissioned Keolis to operate two sections of its regional transport network in the Alpes-Maritimes region of south-eastern France with buses for eight years from 1 January 2022. Within one year, the bus fleet will be all-electric.

The fleet for the two sections includes 120 buses and coaches on 17 routes. By 1 July 2023, Keolis is to introduce a fleet of electric buses consisting of double-decker coaches from Yutong and BYD as well as Heuliez buses. The French public transport operator Keolis was awarded the contract by Région Sud, the authority responsible for inter-urban transport in the regions of Provence, Alpes and Côte d’Azur.

The transport network in question covers the coastal region of Alpes-Maritimes and the hinterland of Grasse in south-eastern France and includes three high-frequency lines, two airport lines and twelve regular lines. The two sections won by Keolis include the region’s main cities (Cannes, Nice, Grasse and Antibes), several business parks and tourist centres, Nice-Côte d’Azur International Airport and the Sophia-Antipolis Technology Park. Keolis is already currently responsible for the operation of part of the two tendered sections.

In addition to electrification, the public transport operator aims, among other things, to increase the frequency of services, improve complementarity with the TER regional rail networks, create weekend services on certain lines and take bicycles on certain buses.

Keolis says that it will manage the entire investment in vehicles and charging facilities, the conversion of two depots to electric vehicles and the application for ISO 14001 certification for all Keolis Alpes-Maritimes activities. The company did not reveal how many buses from each of the three manufacturers mentioned will be used.

Keolis can draw on a lot of experience from other cities where the public transport provider has introduced electric buses and adapted the infrastructure. In the Dutch provinces of Gelderland and Overijssel, for example, Keolis put 246 electric buses into operation in December. Likewise in Bergen, Norway, where 138 electric buses (including 102 fully electric vehicles) have been in operation since the winter. Keolis is also pursuing electrification projects in France: A hydrogen-powered rapid bus network is being built in Pau, and a battery-powered rapid bus network in Amiens. In the southwest of France, Keolis also put a second electric bus line into operation in the spring.

In May, Keolis was awarded a ten-year contract worth 150 million euros by the Västraffik transport association to operate and maintain fully electric articulated buses in the Swedish city of Gothenburg.