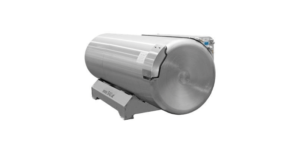 The Salzburg Aluminium Group (SAG) is developing a cryogenic tank system for liquid hydrogen (LH2) for trucks. Prototyping is to begin in a few months, followed by test phases. Based on the results obtained, SAG wants to produce the LH2 cryo tank in series from 2027.

Liquid hydrogen is considered superior to gaseous H2 in the truck segment, especially in view of its significantly higher energy density. Daimler’s GenH2 truck currently doing road tests runs on liquid H2. The disadvantage is that LH2 has to be stored at -250°C to liquefy. The Salzburg-based Aluminium Group now wants to use its experience in the field of cryo-tank solutions for trucks powered by liquid natural gas to develop an analogous system for liquid hydrogen.

In addition to the extremely low temperature, the Austrian company describes the requirements for the size and weight of the tank system as being challenges that require “technical excellence”. They also say that the development is already so far advanced that prototyping can start in a few months when an intensive test phase is to be initiated, followed by series production from 2027.

As a prototype for the LH2 tank system, SAG is currently developing a double-walled, vacuum-insulated stainless steel tank that “offers the highest possible hydrogen capacity in the existing installation space”.  SAG is basically aiming for a small space requirement for its tank system in order to grant a high transport volume and only cause a small payload loss.

“As a prototype for the LH2 tank system, a double-walled, vacuum-insulated stainless steel tank is being developed. It offers the highest possible hydrogen capacity in the existing installation space. A unique valve system designed for the extremely low temperatures will enable safe refuelling and reliable supply of hydrogen to the fuel cell,” says Johannes Winklhofer, head of SAG’s R&D department.

The manufacturer assumes that with the cryo tank solution developed in-house, it will be possible to realise about twice the range of gaseous H2 in the future. According to the Austrian company, trucks equipped with two liquid hydrogen tanks of maximum size registered in Europe should be able to cover up to 1000 kilometres.

“Due to the EU legislation, which stipulates that car manufacturers must equip around 50 per cent of the vehicles produced with zero-emission drives by 2030, there is great interest in a future-oriented storage solution for liquid hydrogen,” says Karin Exner-Wöhrer, CEO of SAG. “We can make full use of our know-how in the cryo tank sector, which we bring with us from LNG tank production, and open up a new business field that holds great potential for the future – both for SAG and for climate protection”

The Salzburger Aluminium Group is a family-owned Austrian company with 1,100 employees worldwide at twelve locations in Europe, Mexico, the USA and Canada. The headquarters of the company, which goes back to Salzburger Aluminium founded in 1898, is in Lend/Salzburg. Other SAG locations in Austria are Schwarzach/Pongau and Vienna. SAG has subsidiaries in Sweden, France, the Netherlands, Slovakia, Spain, Mexico, the USA and Canada.

In addition to aluminium tanks, SAG also produces other lightweight components, air reservoirs, compressed air tanks and special components for the commercial vehicle, railway and special vehicle industries. The company says that the export quota of their products is over 90 per cent. The turnover of the entire group of companies in 2020 was around 155 million euros.