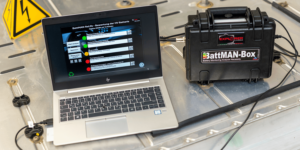 Volkswagen has just launched an analysis software called BattMan ReLife for batteries. The quick-check carried out by the software as an initial diagnosis is now being used in a pilot plant for battery recycling that Volkswagen Group Components has been operating at the Salzgitter site in Germany since the beginning of the year.

According to the German carmaking giant, BattMan (Battery Monitoring Analysis Necessity) is able to determine the state of health of batteries within a few minutes. The tool can make a quick check of the battery when electric vehicles have reached the end of their service life. The new software helps assess how to best utilise the used battery in the circular economic cycle.

Volkswagen’s BattMan is a superhero of optimum resource use: depending on the performance determined by the test system, the HV battery can be used again in whole or in part in another vehicle, given a second life as a mobile or stationary energy storage device, or the material can be fed back into cell production through recycling processes.

The first version of the BattMan software was initially developed by Audi Brussels Quality Assurance for the fast and accurate analysis of the Audi e-tron’s high-voltage battery. It is already being used as a diagnostic tool by several Volkswagen Group brands. BattMan was then further developed in collaboration with recycling experts from Volkswagen Group Components for the opening of the battery recycling pilot plant at the Salzgitter site at the beginning of the year. It then turned out, that after several months of programming and testing, BattMan ReLife became the new analysis solution that provided a reliable initial assessment for further action in just a few minutes. Previously, this process took several hours.

The quick check is carried out as follows: After connecting low-voltage plugs, the device checks whether the battery is able to communicate at all and transmit data. After that, error messages, insulation resistance, capacity, temperatures and cell voltages can be determined and displayed. “We are able to measure all a cell’s most important parameters. Then a traffic light system indicates the status cell by cell – green means a cell is in good order, yellow means it requires closer inspection, and red means the cell is out of order.,” explains Axel Vanden Branden, Quality Engineer at Audi Brussels.

This determines the overall condition of the battery and how it should be handled. Batteries in good to very good performance condition are sent for so-called “remanufacturing” and continue to be used as replacement parts in an electric vehicle. If the battery still has a medium to good performance status, it is used in a ‘Second Life’ application. According to Volkswagen, this can be the case, for example, in a flexible rapid charging station, a mobile charging robot, a driverless transport system, an industrial truck, a home storage system or an emergency power backup system.

Truly end-of-life batteries will be recycled at the Volkswagen Group Components pilot plant in Salzgitter, which went into operation at the beginning of 2021, where they will be broken down into individual fractions such as aluminium, copper, plastics and ‘black powder’ using mechanical processes. The black powder contains the valuable battery raw materials lithium, nickel, manganese and cobalt as well as graphite, which can be separated by specialised partners using hydrometallurgical processes and then reprocessed into cathode material.

Frank Blome, Head of Battery Cell and System at Volkswagen Group Components, comments: “We know that recycled battery materials are just as effective as new ones. These recycled materials will be used to supply our cell production activities in the future.” These kinds of circular economy solutions are not only good for the environment – they’re also good for business, and on a larger scale, good for the global use of resources.