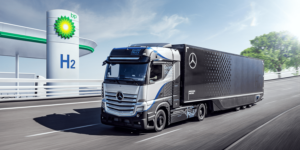 So far, the MoU states that BP could build and operate up to 25 refuelling stations for hydrogen in the UK by 2030. BP would supply these stations with ‘green’ hydrogen generated from water using renewable power, so the agreement. Daimler Truck, in turn, said it expects to deliver hydrogen-powered fuel-cell trucks to its UK customers from 2025 without stating any sales targets.

In the UK, BP is planning a hydrogen-producing facility in Teesside, UK, which could produce 1GW of blue hydrogen, made from natural gas integrated with carbon capture and storage. For the above-mentioned green hydrogen in the region, the company said it was exploring the potential, including supporting the development of Teesside as the UK’s first hydrogen transport hub.

The UK government targets developing 5GW of hydrogen production by 2030.

Karin Rådström, CEO of Mercedes-Benz Trucks and Member of the Board of Management at Daimler Truck, said the hydrogen-powered fuel-cell drive would become “indispensable” in the future when looking at long-haul road transport. She also called for political support playing an “important role in promoting the creation of an infrastructure for green hydrogen and making an economically viable use of fuel-cell trucks possible for our customers”.

Daimler Truck intends to offer only CO2-neutral vehicles in driving operation (“from tank to wheel”) in Europe, North America and Japan by 2039, relying on both battery and fuel cell electric technology. In Europe, the manufacturer’s Wörth plant will reportedly plan a crucial role in producing the zero-emission trucks.

The manufacturer further states a “clear preference for liquid hydrogen”, referring to the higher energy density concerning volume than gaseous hydrogen. This, as a result, makes the tanks of a fuel-cell truck using liquid hydrogen much smaller and, due to the lower pressure, significantly lighter, explains Daimler. In addition, smaller tanks allow more cargo space and a higher payload and ultimately a more extended range as more hydrogen can be carried.

In terms of fuel cell electric trucks, Daimler is testing a prototype of its Mercedes-Benz GenH2 Truck on public roads in Germany at the moment and expects the first series GenH2 Trucks to reach customers starting in 2027. Currently available data for the GenH2 specify two e-motors with 230 kW continuous power each. The fuel cells – from the joint venture Cellcentric together with the Volvo Group – each produce 150 kW. If the motors briefly require more power than the fuel cells can supply, the 70 kWh high-voltage battery supports up to 400 kW during acceleration phases.