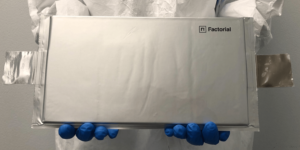 Factorial Energy, a US developer of solid-state battery cells, has announced a collaboration with Hyundai and Kia. The Korean carmaker will test Factorial’s solid-state batteries in its electric cars under a development agreement and make a strategic investment in Factorial.

Factorial Energy does not disclose the amount of this investment in the announcement – but stresses that it is the first investment by a major car manufacturer in the company. The joint tests will not only focus on cells on a laboratory scale, but also on the cell, module and system level. The battery system is also to be integrated into vehicles. However, Factorial does not specify a time frame for this.

This April, the US company announced a 40 Ah cell with solid electrolyte, which is supposed to help electric cars achieve a 20 to 50 per cent higher range. In July, the first results of the test runs were published. According to these, it was possible to achieve a capacity retention rate of 97.3 % for a 40 Ah cell at 25 degrees Celsius after 675 cycles. More current data are not mentioned.

In the announcement of the Hyundai deal, Factorial calls its “FEST” technology (Factorial Electrolyte System Technology) “breakthrough” because it addresses the key issues that “hinder the widespread adoption of electric vehicles by consumers: Range and Safety”.

“The Hyundai CRADLE team has been impressed with Factorial’s management team, technology, and novel manufacturing approach, which could make the transition to solid state seamless and cost-effective,” Henry Chung, senior vice president and head of CRADLE Silicon Valley is quoted as saying in the Factorial release. Hyundai CRADLE is the Silicon Valley-based ‘Open Innovation Hub’ of Hyundai Motor Group.

“Our partnership with Hyundai is yet another validation of our solid-state battery technology, and we look forward to demonstrating its market readiness in Hyundai vehicles,” said Siyu Huang, CEO of Factorial Energy. “We can help unlock mass adoption of electric vehicles — and the resulting environmental benefits — through our safe and long-range batteries.”

The partnership with Factorial is not the only solid-state battery project for Hyundai: the South Korean company also invested in SolidEnergy this summer and, since 2018, has been an investor in Ionic Materials, which develops cobalt-free battery materials for solid-state batteries.

ProLogium closes financing round with $326 million