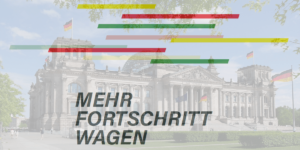 The newly-elected German federal coalition government has presented its coalition agreement. This is titled “Mehr Fortschritt Wagen” and can be translated to something like “dare to innovate” or “dare to make progress.” This, of course, has a number of ramifications for the transport industry.

Contrary to expectation, the three coalition parties did not agree on an end date for the combustion engine but on a reform of subsidies for electric cars and building alternative transport modes. Charging infrastructure is to be improved, and shared and autonomous public transport vehicles are to be promoted. This comes along with a commitment to transfer a proportion of both personal mobility and logistics off Germany’s roads and in short-haul flights, and onto rail transport. Public transport is to be invested in and cycling and pedestrian mobility to be supported. Renewable energy should make up 80% of the German grid energy mix by 2030.

To give you an idea of the German political landscape very briefly, although the former German Chancellor, Angela Merkel, was considered fairly progressive internationally, her party is the Christian Democratic Party, which is Germany’s centre-right conservative party. The position of Federal Minister for Transport – a significant post for the country that manufactures the vast majority of the world’s luxury cars – has, until now, been held by the even more conservative Bavarian arm of this party, the CSU.

Now, the newly elected coalition is made up of the SPD (Germany’s labour party), the Greens (standing, of course, for more environmentally tenable policies), and the FDP, (a smaller, centrist German political party that advocates individualism, capitalism, and social reform). As you can imagine, the German transport industry was expecting some shake-ups with this coalition. Indeed, there is one big surprise with the choice of transport minister, which will be filled, not by the Greens as expected, but by the FDP.

The coalition begins their position regarding transport with the statement (translated): “We want to use the 2020s for a departure in mobility policy and enable sustainable, efficient, barrier-free, intelligent, innovative and affordable mobility for all.”

In more detail, the coalition agreement sets a target for 2030 of “at least 15 million fully electric passenger cars”, which refers to battery and fuel cell electric vehicles and will soon exclude most combustion engine hybrids.

What is not in the coalition agreement is a clear end date for the combustion engine. This is where the FDP will have been particularly stroppy. The centrist, reformist, capitalist party made a point of speaking out against bans on combustion engines in the election campaign, while the Greens actually wanted to end the sale of new combustion engines by 2030 – about five years before the EU de facto wants to phase out the internal combustion engine. “According to the proposals of the European Commission, only CO2-neutral vehicles will be registered in the transport sector in Europe in 2035 – this will have a correspondingly earlier effect in Germany,” the agreement states. “Outside the existing system of fleet limits, we are committed to ensuring that only vehicles that can be demonstrably fuelled with e-fuels can be newly registered.”

On another point, the SPD and the Greens prevailed over the FDP, which had spoken out against electric car purchase bonuses several times during the election campaign: “Particularly due to existing delivery difficulties on the part of manufacturers for plug-in hybrid vehicles that have already been ordered, we will continue the innovation bonus to support the purchase of electric passenger cars unchanged under the current regulation until 31 December 2022.”

To start on 1 January 2023, the parties want to reform the subsidy in such a way that from then on only vehicles “that have a demonstrable positive climate protection effect defined only by an electric driving share and a minimum electric range” will be subsidised. This is to be 80 kilometres from 1 August 2023. It is not clear whether the subsidy rates will also be adjusted in 2023. The innovation premium, which doubles the government’s share of the environmental bonus, is not to be extended beyond the end of 2025.

The new German coalition claims (translated): “We are making Germany the lead market for electric mobility, the innovation location for autonomous driving and are massively accelerating the expansion of the charging station infrastructure.”

“We will enable bidirectional charging, we will ensure transparent electricity prices and publicly visible occupancy status. We will accelerate the development of a nationwide network of fast charging hubs and increase the number of hubs put out to tender,” the coalition agreement says.

Digital mobility services, innovative mobility solutions and car sharing are to be integrated into a long-term strategy for autonomous and connected driving of public transport. In order to ensure that all new buses and the relevant infrastructure runs in a climate-neutral manner as soon as possible, the federal government wants to extend the existing funding and make it more SME-friendly.

In order to include not only Germany’s enormous carmaking corporations but also the SMEs in the automotive regions along with the transformation, the change to electromobility is to be advanced “through targeted cluster funding”. Projects such as the European Battery Promotion (IPCEI) programme are to be further developed. In addition to locating more cell production sites, recycling projects are also “of central importance” – including research into the next generation of batteries.

On the subject of hydrogen, the coalition wants to significantly increase the targets for electrolysis capacity, and the production of green hydrogen is to be promoted. Mobility and fuel cell vehicles are not directly addressed here, but it says: “We do not want to limit the use of hydrogen to certain fields of application. Green hydrogen should be used primarily in those sectors of the economy where it is not possible to convert procedures and processes to greenhouse gas neutrality through direct electrification.” This can be translated as areas that are so-called hard-to-decarbonise sectors, which essentially mirrors policies in both the EU and US governments.

What might be a fairly spectacular target on the international stage is that, in order to make both electrification and hydrogen plan clean, the renewables target should be set at 80 per cent of the increased gross electricity demand of 680-750 TWh in 2030. “Step by step, we are ending the fossil age, also by bringing forward the coal phase-out to 2030 ideally, and leaving combustion engine technology behind.”

Other important mobility projects focus on public transport: Rail transport is to be expanded as the coalition aims to: “increase rail freight transport to 25 per cent by 2030 and double passenger transport performance.” Furthermore: “By 2030, we want to electrify 75 per cent of the rail network and support innovative drive technologies.” In fact, building up rail services is receive more investment funds than roads for the first time. Overnight trains with sleeper carriages are to return to service.

Reform of the aviation sector strongly relates to the goals for rail transport. Here, the coalition aims to “reduce the number of short-haul flights through better rail connections.” Furthermore, the coalition says that until the European decision on the introduction of a kerosine tax based on the energy content, it will advocate the introduction of an air traffic tax throughout Europe and such a tax is to be levied in Germany. The aim is also then to “lobby the European Union to ensure that airline tickets are not sold at a price be sold at a price below the taxes, surcharges, fees and charges.”

Here, the coalition contract states: “We will promote shore power and alternative drives and fuels. We will adapt the fleet renewal programme for climate-friendly inland navigation. We want to take the
We want to keep an eye on the overall burden on shipping when designing Fit for 55,” referring, of course, to the EU transport decarbonisation goals.

Although it was expected that the Green party would take over the transport ministry from the CDU/CSU, this is not the case; The Federal Ministry of Transport and Digital Infrastructure is to be headed by FDP Secretary-General Volker Wissing.

The coalition agreement provides for a total of 17 ministries. One new aspect is that the Ministry of Economics will also be responsible for the climate in future – as the “Ministry for Economy & Climate”. Just like the Ministry of the Environment, which is also important for mobility, it is in the hands of the Greens.

As for criticism, the coalition agreement has already garnered plenty, although this will be expected from Germany’s powerful car lobby, however, there is some criticism and praise from the German transport association, the VCD. Prof. Dr Stefan Bajohr, VCD Federal Chairman says: “The instruments on which the three parties have agreed on mobility hardly contribute to achieving the Paris climate goal. Without speed limits, without a clear end to the construction of new roads and internal combustion engines, without absolute priority for the environmental network of trains, buses, bicycles and pedestrians, the transport turnaround will fail. The new transport minister must do more than just administer declarations of intent.”

As it now stands, the coalition agreement has not yet been completely finalised and these processes will run until 4 December. On that day, if all parties agree, Olaf Scholz could be elected Chancellor on 6 December and then appoint his cabinet. According to information from Der Spiegel, Scholz is to be elected on 6 December at the earliest, but no later than 8 December.