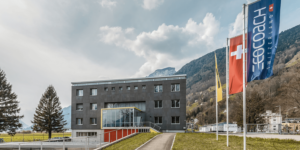 The Swiss battery systems manufacturer Ecovolta is launching a new generation of its traction battery evoTractionBattery. According to the company, the lithium-ion battery is specifically designed for electric commercial vehicles, machines and boats.

The new battery system is “characterised by a high energy density of up to 172 watt-hours per kilogram of battery weight, scalability and extensive safety features”, the Swiss company says. According to information on the Ecovolta homepage, the currently available generation also achieves up to 172 Wh/kg. However, the mechanical construction, materials, battery connections and battery management are said to have been improved.

Other important data: The improved battery system works with voltages of 48 and 96 volts, is available in four different storage sizes and with interlinking options for different applications and installation spaces. In principle, it can be used at up to 400 volts at the overall system level. The integrated battery management system is based on the automotive standard ISO 26262. According to the manufacturer, battery integration is ensured by standardised interfaces to various onboard chargers. In addition, the evoTractionBattery is said to have a safety concept as standard, which automatically separates defective cells from the rest of the battery pack in the event of increased current flows.

“Our customers appreciate the compact design and energy density of our batteries. Customised traction batteries often require elaborate certification of the system. By interconnecting several Ecovolta batteries to form a complete system, the storage units often no longer need to be individualised and recertified. This reduces development costs and time-to-market,” explains Andreas Schimanski, Director Business & Technology.

At the beginning of 2020, we last reported on the Swiss battery system manufacturer in connection with a converted Caterpillar Cat 301.7 mini-excavator. At that time, Ecovolta equipped the machine with an electric drive on behalf of Avesco AG. In addition, the partners made it public that the Swiss company was also supplying its battery systems for series production.

Ecovolta describes itself as a manufacturer of battery systems for electric vehicles and machines with its own research and development department. The company is a division of the technology company Ecocoach AG and has its headquarters in Brunnen, where production is also located. In addition to battery system supply, the Swiss company’s range of services also includes contract development, system integration and maintenance of the battery systems.