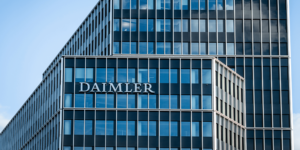 Daimler announced that its Chinese partner BAIC has already held a voting share of 9.98 per cent in its own group since 2019. This is about twice as much as previously known. In return, the Stuttgart-based company holds 9.55 and 2.46 per cent in BAIC’s subsidiaries BAIC Motor and BAIC BluePark, respectively.

BAIC had officially joined Daimler in July 2019 with a stake of around five per cent. The German carmaker has already held a 9.55 per cent stake in BAIC Motor since 2013, and a small stake in BAIC BluePark since 2018. Daimler has now announced that BAIC’s stake has been around twice as high as previously known for a good two years. The Stuttgart-based company does not state the reason for the secrecy – nor does it state the reason for the publication at the present time.

An official statement simply says that “this underlines the successful partnership to continue the long-term success of Mercedes-Benz in China”. Moreover, according to an agreement between the two companies, BAIC is said to have no further ambitions to increase its stake in Daimler.

Ola Källenius, Chairman of the Board of Management of Daimler AG and Mercedes-Benz AG, is quoted in the statement as saying, “We are pleased with the commitment of all long-term shareholders who support our strategy. In the course of our partnership with BAIC, China has become the largest global market for Mercedes-Benz and a key driver of the shift towards electric mobility and digitalisation. BAIC’s investment in Daimler reflects its commitment to our joint successful alliance in production and development in the world’s largest passenger car market.”

Mercedes-Benz aims to become a pure electric brand by 2030 – “wherever market conditions permit”. China plays a key role in this strategy, the Stuttgart-based company said: “By the end of 2021, four electric vehicles will be launched in China, three of which will be produced locally.” The localisation of a fourth model, the EQE, is planned for next year.

The German group describes BAIC as its most important industrial partner of Mercedes-Benz in China. Together, the two have just recently completed a new battery production line in Beijing through their Chinese joint venture Beijing Benz. The battery packs produced there will be used in the Mercedes-Benz EQE for the Chinese market in the future.

Beijing Benz has already been building the EQC since 2019. Since October, the smaller EQA and EQB electric SUVs have also been available for pre-order in China – the EQB was even presented in China at the Shanghai auto show in April. Despite its strong position in the Chinese combustion market, however, Mercedes-Benz has so far performed weakly in electric car sales – the brand does not make it into the top 15 of the China Passenger Car Association’s monthly figures. Mercedes does not publish its own monthly figures for China.