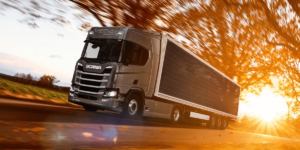 The three commercial vehicle manufacturers Daimler Truck, Traton and Volvo Group have signed a memorandum of understanding on the development and operation of a public high-performance charging network for battery-electric heavy-duty long-haul trucks and coaches in Europe.

The partners initially intend to invest a combined 500 million euros to establish at least 1,700 high-capacity charging points near motorways and at logistics hubs and unloading points within five years of the establishment of the joint venture. The charging stations are to be operated exclusively with green electricity and made available to all users across all brands.

Technical details about the planned charging points have not yet been released, so the charging standard, charging power and also the planned size of the charging parks remain unclear. It is only hinted that the partners want to consider different use cases “as part of a customer-centric approach” – i.e. charging during the legally prescribed 45-minute rest period for drivers as well as slower charging overnight.

“It is the joint aim of Europe’s truck manufacturers to achieve climate neutrality by 2050,” says Martin Daum, CEO Daimler Truck. “However, it is vital that building up the right infrastructure goes hand in hand with putting CO2-neutral trucks on the road.” Traton CEO Matthias Gründler added: “We now make the first step to accelerate the transition towards sustainable, fossil-free transport. The second step should be a strong engagement of the EU for the full scale-up of a charging network across Europe.” For Volvo CEO Martin Lundstedt, the planned joint venture is the foundation “in making a break-through for our customers to make the transformation to electrification by creating a European charging network leader”.

Further expansion beyond the aforementioned plans has also already been discussed: Additional partners, as well as public subsidies, are to contribute to significantly increasing the number of charging points “further down the line”. The statement quotes a report by the industry association ACEA, according to which up to 50,000 high-performance charging points would be needed in Europe by 2030 at the latest – this contrasts with the announced “at least 1,700 charging points” of the joint venture.

In this context, the three partners see their competitors as well as politicians as having a duty. “The pioneering work of the partners is therefore a call to action to all other industry players, as well as to governments and legislators, to achieve the set climate targets together with a rapid expansion of the necessary charging network,” the statement reads.

Daimler Truck and the Volvo Group are already working together in the fuel cell joint venture Cellcentric. Traton is not part of it, as the VW commercial vehicle subsidiary focuses primarily on battery-electric mobility and sees the fuel cell as having an advantage only in some special applications. So while Traton is mainly planning battery-electric long-haul trucks, Daimler and Volvo are on two tracks here.