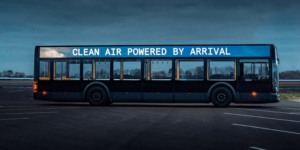 In the UK, Arrival has started trials of its electric bus at a testing facility. Arrival is expected to begin production for the bus in Q2 2022.

Arrival announced the trials in February last year, whereby they were scheduled to start in autumn just passed. Now the company has commenced the ground trials at their new UK testing ground after which they will commence public road trials of the bus with the British company First Bus this quarter (Q1 2022).

Arrival first demonstrated the e-bus concept in June 2020. Through utilising low-cost materials, simpler assembly processes and, above all, smaller and lighter batteries, the manufacturer says the vehicle cost significantly less than current battery-powered buses available. However, Arrival is not the only bus manufacturer to go for lighter buses: the Dutch bus manufacturer Ebusco unveiled its 3.0 generation of lighter buses in 2019, which is able to manage a longer range because of its lighter weight. What their Dutch competitors don’t have are microfactories across the pond in the USA.

Last summer, in 2021, Arrival revealed that they had received an order for the electric buses from the US where is currently building a battery assembly plant and headquarters in Charlotte, North Carolina. Charlotte is also where Arrival is locating its US headquarters, which is also to be the site of the second US micro-factory. In the USA, Arrival will manufacture the 10,000 electric transporters that UPS ordered from the company in January 2020.

Commenting on the trials now underway in the UK, Franck Dessenis, in December just passed, Vice President of Bus Platform, Arrival exclaimed: “This is a key milestone for Arrival and we’re thrilled to have started proving ground trials, where the Bus is currently going through testing, ahead of EU certification and public road trials, next year,”  he said, referring to this year just started. He noted that there has been strong interest from governments who are looking to upgrade their public transportation networks, in order to achieve their zero-emission pledges. “We’re partnering closely with governments, cities, and operators to build infrastructure solutions and seamless mobility services for local communities to support their clean energy targets,” he explained.

In the UK where the trials are now taking place, the British company moved into a factory site in Bicester in early 2020.

“This key milestone for Arrival is a testimony to our innovative technologies and our unique new method of design and production of electric vehicles,” said Denis Sverdlov, Founder and CEO at Arrival, adding: “The Arrival Bus is different from any that has come before, employing technologies developed in-house to create benefits for operators, passengers, and the planet. Now more than ever, governments and cities must reform public transportation to have the radical impact the world needs today.”

Hexagon Purus to supply H2 fuel cell trucks to the US