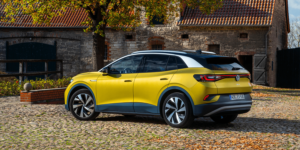 VW will start series production of the ID.4 in the USA in September or October 2022, according to its North American unit head. There will probably be slight differences to the examples of the electric SUV built in Europe.

This article has been updated. Please continue reading below.

VW had already started pre-series production of the ID.4 at its US plant in Chattanooga in August 2021 and announced the start of series production during 2022. ID.4s currently sold in North America will be built in Zwickau and then shipped.

North America boss Scott Keogh also confirmed at a press briefing that the US version of the ID.4 will differ slightly from the European model. Among other things, cells produced in Georgia by SK Innovation will be used instead of those from LG Energy Solution.

But: The changes are probably only the cells, which also use slightly different cell chemistry. The battery pack itself and the rest of the vehicle are not likely to be changed. “About 96 per cent of it is identical,” Keogh specified, “The core mechanical bits are still there, but we’ll be switching from the LG-supplied battery to one from SKI that’ll be manufactured in Georgia. The cell chemistry is slightly different, but the packaging is exactly the same.” Volkswagen’s North American boss left open whether the changed cell chemistry will influence the technical data – for example, in the charging curve or power output.

A change in the interior is confirmed: Keogh mentioned a “slightly different design of the centre console, which is more in the American style”. However, the infotainment display in the centre and the MEB-typical smaller screen with the instruments for the driver will probably not be adapted. Such a change does not come as a surprise; VW has been adapting global models to the tastes of consumers in individual countries in this way for years – even the Chinese versions ID.4 X and ID.4 Crozz differ slightly. However, larger changes, such as the repeatedly reported request of Chinese customers for a larger touchscreen, are not easy to implement.

According to a Volkswagen America statement, the brand sold 16,742 ID.4s in the US last year. Of these, two-thirds of the buyers were new VW customers – which is still about 11,000 customers. Nevertheless, Keogh is not satisfied with ID.4 sales; in his opinion, there could have been about four times as many vehicles. The manager cites supply bottlenecks in importing the cars from Europe as the reason for this assessment. In addition, VW has more than 40,000 reservations – which could not be fulfilled with not even 17,000 vehicles delivered.

Volkswagen of America has announced EPA-estimated fuel economy figures for the 2022 ID.4 electric SUV. The ID.4 Pro has an EPA-estimated 280 miles of range, which is an increase of 20 miles from the 2021 model.

Zeekr is getting ready for EU entry

2 Kommentare zu “Volkswagen prepares for ID.4 production in the USA”