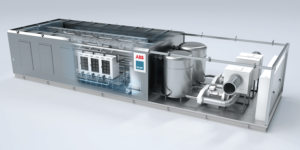 ABB and Ballard Power Systems have received Approval in Principle (AIP) from the international classification society DNV for their maritime fuel cell concept. The fuel cell system should be able to generate 3 megawatts of electrical power in ships.

Ballard and ABB already signed an MoU in 2018 to jointly develop fuel cell systems for maritime electric mobility. Even then, the 3 MW output was a development target. The fuel cell module is to be no larger than a conventional, fossil-fuelled ship’s engine.

Getting the AIP is an important milestone in the development of new technologies. This independent assessment of the concept, confirms that the design is feasible and that there are no significant barriers to realising the concept. ABB says that once the AiP is in place, the jointly developed solution can be finalised for use onboard a wide range of vessels in the next few years.

In ferries – with their potential of regularly bunkering new hydrogen – the hydrogen fuel cell module will either serve as the sole power source for the electric drive or take over as a kind of hybrid solution in environmentally sensitive areas or emission control zones such as those introduced on Norwegian heritage fjords. On larger ocean-going vessels, the module is to be able to cover auxiliary needs. The concept of the solution also provides for integration with an energy storage system.

With Norwegian stipulations leading the way, in 2018, the International Maritime Organization called for the decarbonisation of the shipping industry. Here it should be noted, combustion engines on ships use bunker fuel, which is some of the dirtiest fuels types on the planet. Since larger ships on longer routes present a considerable challenge for decarbonisation, this hard-to-abate sector has enjoyed considerable focus for hydrogen and hydrogen fuel cell projects.

In response to the IMO stipulations, the Norwegian Havyard Group began working with partners on a fuel cell system for large ships with Linde Engineering as tank supplier and PowerCell Sweden as fuel cell supplier. In this case, the plan is to connect several 200 kW modules in parallel, resulting in a total output of 3.2 megawatts – so a similar size to the project between ABB and Ballard. Almost exactly a year ago, the Canadian-Norwegian battery specialist Corvus Energy began developing and producing maritime fuel cell systems on a large scale in cooperation with Toyota.

Both ABB and Ballard have already accrued considerable experience with fuel cell systems for maritime applications. Just earlier this month, Ballard already delivered two – albeit much smaller – fuel cell modules for Norwegian ferries. The two, 200 kW FCwave modules were delivered to Norled, one of Norway’s largest ferry and express boat operators. And already back in 2018, ABB and the research organisation SINTEF of Norway began investigating whether fuel cells are a feasible energy source for main ship propulsion.

The successful development of this larger system concept between Ballard and ABB is building on a three-year collaboration between the two companies. Ballard points out that zero-emission hydrogen fuel cells are already powering smaller vessels over short distances, and confirm that hydrogen fuel cell technology is on the verge of being ready for installation on larger ships.

“ABB’s industry-leading experience in marine solutions and Ballard’s expertise in development and deployment of megawatt-scale fuel cell systems for land-based use has proven to be the right combination, enabling us to take the next step in our joint efforts to make this technology available for larger vessels,” said Jesper Themsen, President and CEO of Ballard Power Systems Europe A/S. “Securing an AiP offers a signpost to the maritime industry regarding the potential of this truly transformative concept.”