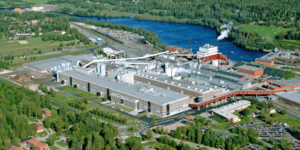 According to Northvolt, the converted factory is expected to begin the first part of its operations by the end of 2024 and employ up to 1,000 people. When fully developed, the site is expected to produce cathode materials equivalent to 100 GWh of battery production capacity. The cathode materials will be used in battery cells at a dedicated battery production facility in Borlänge, but also at other Northvolt facilities.

The first phase is scheduled to come on stream at the end of 2024. Northvolt has not yet given a date for when the expansion of the site is to be completed. So far, it only says it plans to “reuse and overhaul much of the existing equipment and site infrastructure.” Northvolt leaves open whether that will speed up operations or be more complex than building a new facility with equipment designed and purchased for that purpose.

But for Northvolt CEO Peter Carlsson, it’s not a question of speed, but more importantly, sustainability. “Since Northvolt’s founding, we have focused on circular battery production, but this is the first time we will reuse an entire production site,” he said. “With its access to energy, industrial water and the broad production know-how in the region, Kvarnsveden is an optimal site for a gigafactory. We are thrilled to be able to open a new chapter in Borlänge’s history as a global industrial hub.”

With the aforementioned access to water our clean, locally generated energy, the site does indeed meet important criteria. The current owner has also paid attention to sustainability. “Sustainability is the main priority for Stora Enso and has to be addressed also in difficult times,” says Per Lyrvall, Country Manager Sweden at Stora Enso. “Hence, a key focus since our decision to close the site has been to find a new owner that, to the benefit of the local society, can continue Stora Enso’s long and sustainable-driven legacy at Kvarnsveden.”

The mill was established in 1900 and produced pulp and paper until its closure in 2021. More than 400 employees had to be laid off as part of the closure.

Northvolt had manufactured the first prismatic cell on the commercial production line at its Ett factory in Skellefteå, Sweden, at the end of December 2021, marking the start of volume production. In early February, it was announced that the joint cell factory with Volvo would be built in Gothenburg, not far from Volvo’s Torslanda plant, with Northvolt’s third Swedish cell factory scheduled to start operations in 2025. Production capacity is expected to be up to 50 GWh.