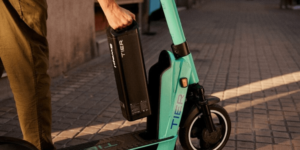 Micromobility provider Tier and Berlin-based startup Vertical Values are collaborating on solutions to extend the life of lithium batteries. The goal is to use reuse and circular economy practices to reduce environmental impact.

As the two partners indicate, lithium-ion batteries lend themselves particularly well to reuse. Vertical Values repairs defective batteries from electric scooters. Instead of replacing and disposing of entire batteries, the company aims to assemble the still-usable cells into a new battery.

If repair is not possible, continued use is the goal. Each cell removed is evaluated individually to determine its SoH (State of Health). “Once the cells are properly tested, they will be sorted. Sorted cells are then repurposed and turned into new products, which extends the lifespan of the cells,” Tier writes.

“We are delighted to work with Vertical Values to extend the lifespan of e-scooter batteries and have a new partner who can help make our light electric vehicles even more environmentally friendly,” said Ailin Huang, Head of Sustainability at Tier Mobility. “We always first prioritise reuse over recycling according to circular economy principles. Next to the e-scooter as a whole, the batteries hold the biggest opportunity for reuse as they still have over 80% of their capacity even after several hundred charging cycles. So, it’s absolutely critical that we scale up the reuse of batteries.”

The startup Vertical Values was only founded in 2021 and is based in Berlin and is active throughout the European market.

In Europe and North America, the battery reuse and recycling industry is only just getting into action from the mass production of electric vehicles. In China, where electric vehicles hit mass markets much earlier, the reuse of vehicle batteries has been the focus of a number of government stipulations whereby second-life use is even regulated into a most-urgent-use-first policy called gradient, cadence or ladder reuse before recycling.

Tier has been particularly attentive to the sustainability of its services, products and processes. Tier is already engaged in second life projects for used batteries. In April last year, Tier Mobility partnered with Ari Motors and Ono to electrify the company’s fleet for operational use – meaning, that Tier staff now use electric transporters from Ari and cargo pedelecs from Ono to collect and exchange the batteries and kick scooters in the fleet. Later last year, Tier and MAN Truck & Bus signed a framework agreement for the delivery of up to 130 MAN eTGE battery-electric vans. The first vehicles are already in use in Tier’s logistics fleet in the UK and Germany.

In another measure to make their micromobility services as sustainable as possible, Tier also uses a battery-swapping system for its electric vehicles and is working on optimally sustainable batteries in partnership with Northvolt. Here, the aim is to improve the sustainability of electric scooter batteries and their raw material requirements, as well as improving sustainability by means of battery swapping stations and recycling. Battery swapping means that batteries can be easily renewed while the robust electric vehicles can remain the same, saving materials, energy and making battery reuse and recycling a whole lot more straightforward.

Revel draws in $126 million in Series B