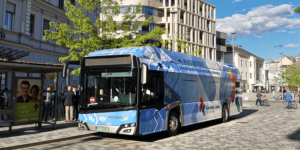 Solaris has signed another framework agreement with the Austrian transport authority, Österreichische Postbus AG. This covers battery-electric and hydrogen-electric buses that the Austrian bus operator intends to procure between 2022 and 2025.

The framework agreement stipulates that Solaris will deliver up to 82 hydrogen-powered Urbino 12 Hydrogen and up to 24 battery-electric Urbino 9 LE Electric. Potential orders are to be placed in the period 2022-2025, with an extension option to 2028 also agreed.

The last framework agreement between Solaris and Österreichische Postbus AG, dated February 2021 included a delivery of up to 40 Urbino 12 hydrogen. So far, the Austrian transport authority has only ordered five of these. Nevertheless, they seem to be very satisfied with the H2 bus, if the possible number has now been more than doubled.

The Solaris hydrogen model was presented in Stockholm in June 2019. The H2 fuel cell bus comes with two electric motors with a power of 125 kW each, fuel cell modules with a power of 70 kW, a small battery and five hydrogen tanks made of composite material with a total capacity of 1,560 litres. Solaris claims a range of up to 350 kilometres.

The new element of this current contract, in contrast to the agreement from 2021, is the option for Österreichische Postbus AG to also procure the nine-metre version of Solaris’ battery-electric Urbino series. The Polish manufacturer just presented the minibus in September 2021. The electric low-entry bus has been designed for inner-city routes and intercity routes.

Solaris says that the Urbino 9 LE electric will “cope perfectly on steep routes or in tight curves in the Austrian mountains thanks to its compact dimensions”. The approximately 280 kWh battery supplies energy to a 220 kW electric central motor.