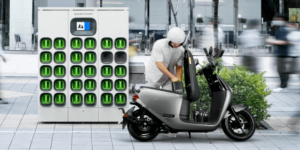 Gogoro has completed its IPO in the US. The Taiwanese electric scooter and battery exchange provider completed its merger with the special purpose vehicle Poema Global and is now listed on Nasdaq under the ticker symbols ‘GGR’ and ‘GGROW’.

After the move was initially announced in September last year, Gogoro now expects to raise approximately $335 million in proceeds from the IPO. The timing couldn’t be better as Gogoro has been quite active of late, through partnerships as well as its own endeavours. In March, for example, Gogoro and ProLogium presented a new lithium-ceramic solid-state battery cell technology, which the battery-swapping expert will be integrating into their network. Yamaha also recently presented a new electric scooter powered by Gogoro batteries.

The company intends to use the fresh funds to further expand its business. Gogoro is concentrating primarily on densely populated Asian cities where two-wheelers have already proven themselves. The expansion in Taiwan is to be continued and the business generally extended to larger markets such as China, India and Indonesia.

“Gogoro battery swapping is transforming urban mobility in the world’s most densely populated cities by changing how people use and share portable energy,” said Horace Luke, founder, chairman, and CEO of Gogoro. “With innovative technology, an expanding global footprint, and an experienced management team, Gogoro is well-positioned to transform the urban mobility landscape and capitalize on the electric transition of nearly a billion two-wheel vehicles.”

In their native Taiwan, Gogoro is about to pass the number of petrol stations in the nation with their battery swapping stations. For this purpose, Gogoro has also set up a few partnerships to help electrify the nation of Indonesia.