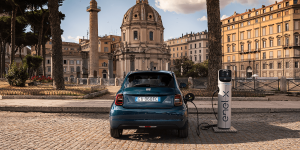 The Italian government is allocating 650 million euros annually for 2022, 2023 and 2024 for incentives to purchase electrified and low-emission vehicles. Private individuals can receive a subsidy of 3,000 euros for the purchase of new electric cars. Small and medium-sized enterprises will also be supported.

The measure is based on a decree proposed by the Minister of Economic Development, Giancarlo Giorgetti. The decree, which Prime Minister Mario Draghi has now signed, reshapes incentives for the purchase of electric, hybrid and low-emission cars and motorbikes and provides funding.

The money is part of the government’s allocation for the Automotive Fund, which has a total budget of €8.7 billion until 2030. In October, the country had increased the eMobility funding budget and in the meantime raised the funding rates over the summer.

Specifically, the new plans now provide that private individuals will receive a subsidy of 3,000 euros for the purchase of new electric cars with a net price of up to 35,000 euros. A further 2,000 euros will be granted if a combustion engine of emission class Euro 5 or worse is scrapped in parallel. For these pure e-vehicles, 220 million euros are available in 2022, 230 million in 2023 and 245 million in 2024.

Minister Giorgetti agrees that the funds will not solve the crisis in the automotive sector. The sector has to renew itself from the ground up. But the newly signed measure is an “emergency instrument that will help us get through a difficult period”. He says: “With the green light for the incentives, we are giving a concrete and long-awaited response to the automotive sector, which is in deep crisis. The multi-annual measure will allow companies to carry out industrial planning on the road to development.”

Italy’s government has already decided to phase out internal combustion engines in major sectors. In December, it announced that it would ban new internal combustion cars from 2035, in line with the EU Commission’s plans. For light commercial vehicles, this is to apply from 2040.