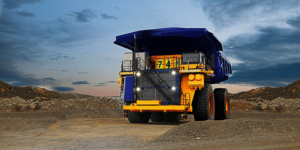 Mining and resources group Anglo American has unveiled the prototype of what it claims is the world’s largest hydrogen-electric mining vehicle. The nuGen dump truck combines multiple fuel cells with a 1.2 MWh battery pack for a total output of 2 MW and can carry a payload of 290 tons.

The mining vehicle is part of a larger project by Anglo American. The nuGen project is a fully integrated hydrogen system consisting of production, refuelling and transportation systems, with green hydrogen produced at the mine site. Under the slogan “Future Smart Mining,” the Group is pursuing what it says is an innovation-driven approach to sustainable mining, bringing together technology and digitalisation.

For the giant dump truck, Anglo American has collaborated with other groups such as Engie, First Mode, Ballard and NPROXX. The fuel cells alone (presumably from Ballard) are expected to produce a combined 800 kW. Unlike trucks and buses, for example, many components have to be newly developed because of the special requirements. According to the announcement, this applies to the hardware as well as the software and the complete energy management system.

The vehicle itself weighs 220 tons, which with the payload results in a total weight of up to 510 tons. However, the vehicle is not new: the dump truck was converted from a diesel engine to a hydrogen-electric drive. The drive, developed together with First Mode from Seattle, can also recuperate, which greatly reduces external energy requirements, especially when driving downhill in the mine. The vehicle is being tested at the Mogalakwena mine in northwestern South Africa. Among other things, platinum is mined there, which is used in catalytic converters and also fuel cells.

“The impact of our nuGen™ project goes far beyond our operations. We believe that the emerging hydrogen sector has the potential to dramatically improve the growth and development of many economies by creating new industrial value chains and economic generation opportunities,” says Anglo-America CEO Duncan Wanblad. “Growing the hydrogen economy will revolutionise not just Anglo American’s operations, but all mining and many other industries – and ultimately shape a better, cleaner world.”

Wanblad also indicated that the company’s current diesel truck fleet will be converted to hydrogen or replaced with equivalent vehicles in the coming year. “If this pilot is successful, we could remove up to 80% of diesel emissions at our open pit mines by rolling this technology across our global fleet,” the CEO said. Emissions from the van fleet account for ten to 15 per cent of the company’s total emissions. By 2040, Anglo American aims to be CO2 neutral.