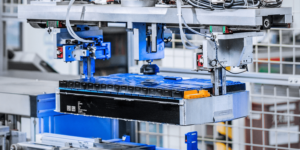 The BMW Brilliance Automotive (BBA) joint venture has just established a closed cycle recycling operation in China for the reuse of the raw materials nickel, lithium and cobalt from high-voltage batteries. Compared to the use of newly mined material, CO2 emissions are to be reduced by 70 per cent.

The company says that for the time being, the batteries still come from fully and partially electric development vehicles, test facilities and the production committee.

In future, batteries from end-of-life vehicles are also to be used. The joint venture will not extract the raw materials itself. The discarded batteries are dismantled by a local recycling company and the raw materials are recovered “to a high percentage”.

The BMW Group says materials recovered in this way are then used to produce its new battery cells. “Against the backdrop of increasing scarcity of finite resources and rising raw material prices, it is particularly important to promote the circular economy, increase the proportion of reused materials and reduce dependence on raw materials,” says Jochen Goller, Head of BMW Group Region China.

BMW has not yet revealed with which Chinese company it is collaborating, although it is likely to be Zhejiang Huayou Recycling Technology, since according to a report by Gasgoo it has entered into such a partnership with the BMW Group. Under the new cooperation, the duo will expand the application of used batteries to all facilities at BMW’s Shenyang site.

BMW wants to further expand the recycling concept in China. In 2020, in collaboration with Zhejiang Recycling, the Group started to use spent batteries with high residual capacity in forklifts at the BBA plants in China. In the future, this second-life use of batteries will also include pallet trucks and stationary battery storage with charging stations.

The reason for the company’s further involvement in recycling is likely to be environmental as well as the wave of end-of-life batteries expected for the Chinese market as a result of the steadily increasing demand for electric vehicles. In announcing its China recycling strategy, BMW refers to figures from the China Automotive Technology and Research Centre, which indicate that the total amount of discarded batteries in China will reach about 780,000 tonnes by 2025.

To ensure that the recycling industry can expand effectively, the Chinese government has issued a number of new policies regarding battery reuse and recycling. With regard to these guidelines, the vehicle manufacturer writes: “The BMW Group has developed a system for this, with coding that enables seamless traceability of batteries throughout their lifecycle.” This coding ensures that batteries from the entire value chain are recycled properly.