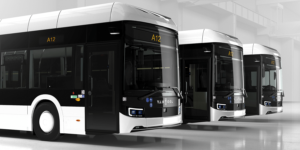 The Belgian manufacturer Van Hool has presented a new bus series with four different vehicle lengths (12, 13, 18 and 24 metres), which will be offered exclusively with zero-emission drive systems (battery, fuel cell and overhead line).

Even before the official announcement of the new A-series, Van Hool had already received 13 orders for a total of 162 buses so it seems they’ve hit a niche for demand.

During the conception and development of the new A-series, Van Hool says it paid particular attention to the modularity of the buses, in addition to weight and durability. For example, the manufacturer attached a modular mounting system to the roof of the vehicles for the installation of components such as batteries, air conditioning and control systems. In this way, retrofitting, a possible later conversion or even the replacement of components is easier to implement.

Other features include the aerodynamic shape of the front, a large windscreen and the latest generation of LED headlights. A closed cabin with plenty of storage space is provided for the driver as standard. The climate inside the vehicle is controlled by a system based on heat pump technology and traction heat recovery.

The battery-electric version is powered by two ZF Axtrax axles, each producing 140 kW, regardless of the length of the vehicle. The batteries are from Akasol, and the energy content ranges from 490 kWh in the twelve-metre bus to 686 kWh in the 24-metre double-articulated bus. Such a body version is often only offered as a trolley bus, but Van Hool will in future also sell the 24-metre bus with a battery.

The fuel cell version uses a fuel cell from Ballard – it is the well-known FCmove HD. The twelve-metre version has a power output of 70 kW, the 18-metre articulated bus 100 kW. The batteries have a capacity of 24 to 132 kWh, the electric drive from Siemens has an output of between 160 and 210 kW, depending on the bodywork.

Depending on the length, the trolleybuses have an NMC battery with up to 72 kWh or four 15 kWh lithium titanate batteries. These also enable short distances without overhead lines. Depending on the version, there is an e-motor with 160 kW power or, in the case of the (double) articulated buses, two powered e-axles.

“The intention in designing the new A range was to come up with an eco-friendly (100 per cent zero emissions), comfortable, safe, timeless and sustainable bus range that can be used in urban and regional transport in Europe,” says Filip Van Hool, CEO of the company. “The new interior and exterior design and the choice of three different powertrains were linked, on the one hand, to the international experiences that we have built up over the past few decades and, on the other, to the challenges that public transport companies will face over the coming years.”

The vehicles already on order are 122 battery-electric vehicles and 40 fuel cell buses of various types that will be used in Denmark, Belgium, Germany and France, according to the company. From Germany, for example, public transport operators from Frankfurt and Eberswalde have ordered a total of eight fuel cell buses of the new A12 model.

At the end of 2020, Van Hool delivered the first of ten fully battery-powered CX45E electric coaches, complete with charging infrastructure, to the USA. In the meantime, 22 of these buses have been sold, and the company recently launched the TDX25E double-decker coach.