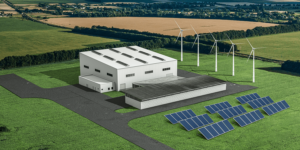 BASF will build a plant for recycling black mass from batteries on an industrial scale in Schwarzheide, Brandenburg – where BASF’s pilot recycling plant is also located. Commissioning of the large plant is planned for early 2024.

The annual processing capacity is to be 15,000 tonnes – old electric car batteries and material that does not meet production specifications will be recycled. The latter can come from the immediate vicinity: As is well known, BASF is also building its German factory for cathode materials in Schwarzheide. Scrap and offcuts can therefore be reprocessed directly on site.

In the press release, the company describes the site as “ideal for the development of battery recycling activities”. Not only because of its own production on site, but “because there are many manufacturers of electric cars and cell producers in Central Europe”. The plant is expected to create about 30 jobs. The company does not specify the amount of the investment.

The so-called ‘black mass’ is produced in the first phase of battery recycling. After the mechanical treatment of the battery (i.e. dismantling and crushing), components such as plastics and aluminium can already be filtered out. What remains is the black mass, which contains large quantities of the battery’s active materials – such as lithium, nickel, cobalt and manganese. To separate this mass back into the individual materials (which are then used to produce new cathodes), water and chemicals are used in the hydrometallurgical process.

“With this investment in a commercial scale battery recycling black mass plant, we take the next step to establish the full battery recycling value chain at BASF. This allows us to optimize the end-to-end recycling process and reduce the CO2 footprint,” says Peter Schuhmacher, head of BASF’s Catalysts division. “The closed loop from end-of-life batteries to CAM for new batteries, supports our customers along the entire battery value chain, reduces the dependency from mined raw materials and enables a circular economy.”

The groundbreaking for cathode material production in Schwarzheide took place in November 2020. About a month later, the group confirmed it would also build the recycling pilot plant on site. At the pilot plant, which is scheduled to come on stream this year, BASF aims to optimise operating procedures to achieve higher recovery of lithium, nickel, cobalt and manganese from spent lithium-ion batteries.