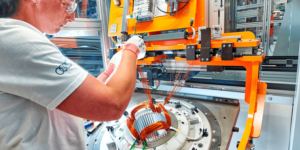 Audi will produce a new electric drive family for the MEB ECO platform for use in the Volkswagen Group’s electric small cars at its plant in Györ, Hungary, from 2025. A new production area is being built specifically for this purpose.

The modular system, referred to as MEB ECO in the Audi Hungaria announcement, is the basis that was previously also called MEB Entry or MEB Small – i.e. the starting point for the production models of the VW ID.1/ID.2, the Cupra UrbanRebel and the corresponding small electric car from Skoda. The vehicles themselves are to be manufactured at Seat’s Spanish plant in Martorell, while the electric drives will be supplied from Hungary, according to the latest announcement.

The new e-motor family will also be manufactured with greater vertical integration: The sheet metal package for the motor will be mass-produced at the company for the first time and the rotor and power electronics will also be produced at Audi Hungaria in future. This will create 260 jobs, and the new production is also being supported by the Hungarian government.

Audi Hungaria produces around 100,000 units of the current electric drives per year – the asynchronous machines for the e-tron quattro built in Brussels are also produced there, among other things. In the near future, Györ will also produce drives for the Premium Platform Electric (PPE).

“In line with the transformation of the automotive industry, it is essential for us also to transform our business model and product portfolio to maintain and further strengthen our competitiveness and provide long-term jobs for our employees,” says Alfons Dintner, Chairman of the Board of Audi Hungaria. “With our forward-looking products and competence-based services, we will continue to play an important role in the Volkswagen Group and contribute to Hungary’s successes in the new era of the automotive industry.”

Györ does not only produce electric drives, however: Audi Hungaria describes itself as the largest engine plant in the world. It builds 1.6 million internal combustion engines per year, which are used not only by Audi, but also by the Group brands VW, Seat, Cupra, Skoda and even the Lamborghini and Porsche sports car brands. Production of electric drive systems for the Audi e-tron started in 2018.