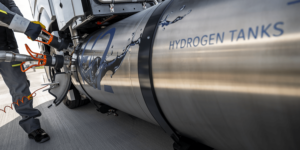 A prototype Mercedes-Benz GenH2 truck has reportedly undergone intense testing since last year – both on the company’s own test track and on public roads. The early prototypes, however, still had conventional pressurised hydrogen tanks since these were of secondary importance then: the hydrogen stored on board reaches the fuel cell as gas anyway.

With the additional prototype now joining the test fleet, Daimler Truck can finally test the liquid hydrogen system. The company reportedly aims to rely on liquid hydrogen of type LH2. While the pressurised tanks in FC trucks are usually stacked behind the driver’s cab, the LH2, cooled to -253 degrees Celsius, only requires two 40-kilo tanks mounted on either side of the chassis, i.e. in the same space usually reserved for diesel tanks. As Daimler Truck announces, these tanks do not require active cooling because the “particularly good insulation” was sufficient for the hydrogen to remain cold enough for the required time.

The company also renewed its preference for liquid hydrogen in developing fuel cell drives due to the “significantly higher energy density in relation to volume compared to gaseous hydrogen” in today’s announcement. Daimler Trucks is reportedly targeting a 1,000-kilometre range “and more” for the series-ready GenH2 Truck.

However, the LH2 not only requires special tanks on the side of the vehicle but also its own refuelling infrastructure – the hydrogen refuelling stations previously designed for commercial vehicles (pressurised refuelling at 350bar) are incompatible with the system. For this reason, Daimler Truck set up a dedicated prototype refuelling station for liquid hydrogen at the test centre in Wörth, Germany, together with Air Liquide and test have been successful, says Daimler Truck.

At the same time, Daimler Truck and Linde are already working on the next step, a new process for handling liquid hydrogen (“subcooled” liquid hydrogen, “sLH2 technology”). The companies say, this sLH2 fuel would enable even higher storage density and easier refuelling than LH2. The plan is to install a pilot refuelling at in Germany in 2023.

Given the rather specialised technology, Daimler Truck and Linde say they were planning for “a high level of transparency and openness” around the jointly developed sLH2 technology. The goal was to collaborate with other companies and associations to develop their own refuelling and vehicle technologies that apply the new liquid-hydrogen standard and thereby establish a global mass market for the new process, so Daimler Truck.

The company adds it intends to work with oil companies such as Shell, BP and TotalEnergies on H2 infrastructure in Europe. Daimler Truck is also a shareholder in hydrogen filling station operator H2 MOBILITY in Germany. The company together with IVECO, Linde, OMV, Shell, TotalEnergies and the Volvo Group are also part of the H2Accelerate (H2A) interest group for the mass-market roll-out of hydrogen trucks in Europe.